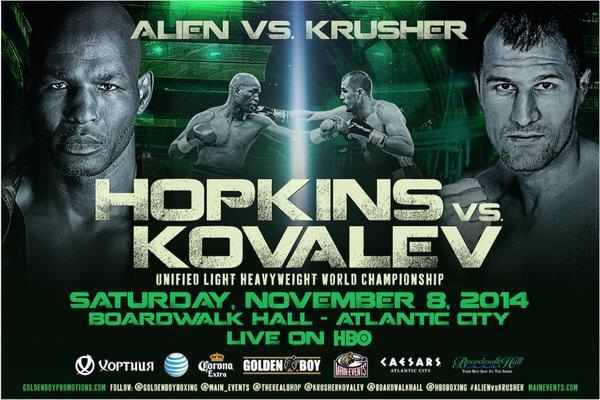 What if I told you a 49 year old man was going to get in a boxing ring with an undefeated 31 year old with 25 wins and 23 knockouts? You might think that sounds like a farce, a laughable mismatch. In fact it is the best matchup, on paper, in the sport of boxing for the rest of the year. That’s because the 49 year old is Bernard Hopkins, master chess player of the ring. He has never been knocked out or cleanly defeated by decision, a fighter that has forgotten more about boxing than most will ever know. He has been underestimated in every major fight he has had. The 31 year old is Sergey Kovalev. He is young, hungry, in his physical prime with scary punching power. His power is so real that unfortunately in 2011, one of his opponents was put into a coma and died three days after getting knocked out. This type of tragedy is the last thing anyone wants to see in boxing but it shows the kind of fearsome situation that awaits the old man.

Kovalev has great talent, power and fire in the belly. Hopkins has a desire to win that is about much more than earning a paycheck, he fights for pride. Normally a fighter of his position and age would avoid such a dangerous challenge but Hopkins feeds on it, rising to the occasion as he did against Kelly Pavlik in 2008 when nearly everyone picked him to lose. Hopkins didn’t lose. He schooled the young Pavlik for 12 rounds and absolutely took his heart. Pavlik was never the same and retired shortly thereafter. Kovalev is no Pavlik, his technique is smarter, his punch is bigger, he is in control of his life outside of the ring. Kovalev also recently became a father for the first time, giving him further motivation to fight for his family’s financial security.

These kind of fighters don’t need any more motivation than to show the other who the best is after the first bell rings before Round 1. The bookies have the fight at even money. This could be a special fight. The live show from Boardwalk Hall in Atlantic City, New Jersey begins with a quality undercard match at 10:45 pm eastern with the main event between Hopkins and Kovalev likely start at approximately 11:45 pm depending on how long the first card lasts. If you can’t stay up late enough for the live show, catch the replay Saturday morning at 8:45 am eastern or afternoon at 4:15 pm on HBO Signature.