It is rather sporadic we know, that is what happens when we don’t have a Sports Writer on staff, but we try to get occasional Boxing news to HBO BOXING fans from time to time. Here is what we got for you.

It seems an HBO BOXING AFTER DARK fight has been canceled. A bout between Mike Perez (20-0-1, 12 KOs) and Bryant Jennings was to take place and be seen on the show on 05.24.14. Mike Perez had suffered a shoulder injury during a sparring match that has forced him to back out. The fight was an important one as the winner would advance to WBC heavyweight competition.

However, HBO has other boxing programs on the schedule for May. Coming up on 05.17 a big bout between Juan Manuel Marquez and Mike Alvarado explodes.  The event, HBO BOXING: MARQUEZ VS. ALVARADO, begins at 10:15pm. Eric Raskin explains it on HBO.com this way. 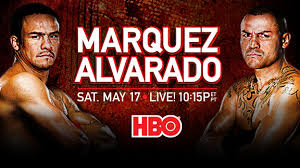 markable 21 years and 63 fights as a professional boxer. But even by his high standards of having been there and done that, Marquez’s showdown on May 17 against Mike Alvarado is loaded with an inordinate amount of déjà vu. From the location, to the style of the opponent, to the questions about how much longer the Mexican icon can keep doing what he does, familiar signposts are everywhere for Marquez. For Alvarado, on the other hand, the guy in the opposite corner and the magnitude of the event present challenges beyond anything he’s experienced before.But for both fighters, the stakes are the same: lose, and you need to seriously reevaluate; win, and you’re negotiating for a fall fight with Manny Pacquiao.

You are always ringside with HBO!