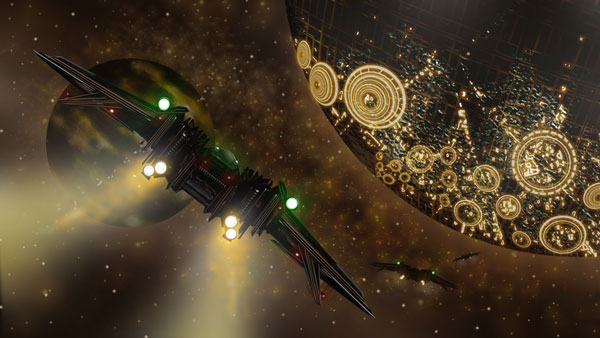 Last year Sony pictures picked up the filming rights to Isaac Asimov’s seminal work, the Foundation series of novels in a massive, multi-studio auction. A feature picture project was set into motion with high-powered names behind it but for whatever reason the work fell through and nothing materialized.  This summer HBO paid a pretty penny to acquire the rights to Foundation when Sony put it back up onto the auction block.

The acquisition of filming rights (even expensive, exciting ones!) doesn’t necessarily mean that a series is going to make it to air but this week Jonathan Nolan, writer of the movie Momento and now scribe for HBO’s newest sci-fi series, Westworld hinted that he might be working on yet another series for HBO saying:

“Well, I f–ckin love the ‘Foundation’ novels by Isaac Asimov. They’re certainly not [unknown], but that’s a set of books I think everyone would benefit from reading. That’s a set of books where the influence they have is just f–cking massive. They have many imitators and many have been inspired by them, but go back and read those, and there are some ideas in those that’ll set your f–cking hair on fire”

Citing “multiple sources familiar with the project” The Wrap reports that HBO is teaming up with Warner Brothers TV, the same studio that helps put on The Leftovers, for a series on HBO.

If you hadn’t already noticed, we can 100% confirm for you that HBO is gunning hard for a premium science fiction series.  There are at least 3 confirmed series in the works.  Westworld, The Spark, an adaptation of Margaret Atwood‘s dystopian future novels, and more.  It makes sense– there are no premium science fiction dramas on television (of this scope and depth) and arguably there hasn’t been a true Sci-fi drama worthy of big awards and massive fandom since Battlestar Galactica and even that, most would have to admit, would have been much better on HBO.  With the premium network’s big budgets and commitment to quality a science fiction series on HBO will be as Game of Thrones was in 2010– scoffed at first but then like nothing ever seen or done before on TV. HBO changed the way we look at high-fantasy on television. Can it do the same for high-science fiction?

Yes, I said it– Foundation is the equivalent of Game of Thrones in Space and that isn’t an exaggeration. The story is sweeping, dramatic, awe inspiring and true to its genre. Hell, Foundation practically gave birth to the genre of science fiction. It isn’t the Game of Thrones of science fiction– it’s The Lord of the Rings of science fiction. When you inevitably go back and read this series as you frantically did with A Song of Ice and Fire consider the themes involved, enjoy them and then realize that they were written down onto paper in 1942.  Way, way before Star Trek, Star Wars, Ender’s Game or probably any other science fiction series you can think of was even a sparkle in their respective author’s eye.  While reading the series myself recently I wasn’t just impressed with how old the ideas were– they still felt fresh and new and original to me 60 years later– and I’m a big fan of the genre!

Convinced?  We could describe the series to you but we wouldn’t do it justice.  Here’s the bookflap description to get you started on your journey:

For twelve thousand years the Galactic Empire has ruled supreme. Now it is dying. But only Hari Sheldon, creator of the revolutionary science of psychohistory, can see into the future–to a dark age of ignorance, barbarism, and warfare that will last thirty thousand years. To preserve knowledge and save mankind, Seldon gathers the best minds in the Empire–both scientists and scholars–and brings them to a bleak planet at the edge of the Galaxy to serve as a beacon of hope for a fututre generations. He calls his sanctuary the Foundation.

But soon the fledgling Foundation finds itself at the mercy of corrupt warlords rising in the wake of the receding Empire. Mankind’s last best hope is faced with an agonizing choice: submit to the barbarians and be overrun–or fight them and be destroyed.

One trouble I can forsee for this series is the fact that they jump in time with each novel. No, not 3 years, not 30 years– try THOUSANDS of years into the future. Often the descendants of your favorite characters remain but this series is more about the galaxy itself, the human race and “The Seldon Plan” (which you’ll find out about soon).  It’s not a character portrait at all.  Often the heroes are similar to the previous heroes and the villains are similar to previous villains. Could actors play their own descendants in future seasons of the show?  Will HBO simply move slowly with each novel, perhaps spanning three seasons for a single book?  Or will HBO take the series in an entirely new direction ala True Blood or The Leftovers– making sure to create the best possible television adaption, if not entirely true to the source material.  Is that what Isaac Asimov would have wanted?  Do you care?

We’ll wait a bit to start speculating about who will play Hari Seldon, one of the only characters that is constant throughout the series (yeah, it’s hard to explain). We’ll get you more news when we have it but an air date at this point is out of the question.  Let’s just say “sometime before Game of Thrones ends” as a solid guess from this reporter.

Do yourself a favor and start reading this series before Amazon jacks up the price on the back of this news.