A few months prior, I was asked by our editor-in-chief to write an article about this year’s potential candidates for HBO’s Hard Knocks.  As a Raiders fan, I hoped to see black & silver uniforms fill my HBOGo interface; albeit an appearance on Hard Knocks is usually indicative of an abysmal previous season and/or high internal conflict within the franchise. Nevertheless, my hopes were answered with the inclusion of the Oakland Raiders on this year’s Hard Knocks. The Oakland 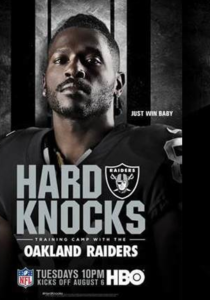 Raiders have in front of them what all teams featured on Hard Knocks have had for the past 14 years:  the infinitely explored redemption story arc. Additionally, the controversial move from Oakland to a 1.84 billion dollar Las Vegas stadium is just over the horizon and will be explored in subsequent episodes.  In the meantime, we once again watch a struggling franchise grasp for greatness. The most profound line uttered in Episode 1 of the fourteenth season of HBO’s gridiron series is “Where’s Roethlisberger?”

“Where’s Roethlisberger?” Wide Receiver Antonio Brown is on the sidelines when one of his children asks this question. Barely deep into grade school, the kid recognizes the importance to the nucleus of a football team’s offense. Raiders quarterback Derek Carr is a sound leader and passer, yet even the youngest fans have already voiced their concerns pertaining to the success of the black & silver. Brown, a former teammate of Steelers great Ben Roethlisberger, is currently on the sidelines due to a gruesome foot injury, an injury not caused by the usual culprits directly associated with the sport.  Rather the cause is indirect, with the improper use of a cryotherapy machine causing severe frostbite.

“In the old days, we’d practice in the afternoon two more times in pads.” “Nowadays I would be incarcerated for that.” “If you don’t know what to do, you won’t play here.” These statements by head coach Jon Gruden were about the pursuit of dreams. Gruden doesn’t believe in chasing dreams, he believes in crushing dreams. And sometimes those crushed dreams are on the Raider’s end zone. Ronald Ollie, the subject of Netflix’s sports 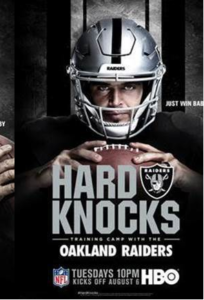 documentary Last Chance U was cut from the Raiders following a disappointing turnout during the training camp. Ollie was eyeing a spot on the team as a secondary defensive tackle. Unfortunately, the undrafted rookie is not agile or explosive enough to make the roster.

On the other hand, strong safety Johnathan Abrams is not having performance issues, but rather obedience issues. Abrams desperately wants to tackle during practice sessions that are only centered on finesse. The coaching staff is appreciative of his hard hustle, but self-control is imperative to not accrue penalty points during actual games.

Archival footage of legendary coach and commentator John Madden (who lead the Raiders to two Super Bowl wins), displayed the importance of a pragmatic and synergetic exercise to set the tone for a grueling day of professional football practice. Madden talks about the importance of each tackler hitting their targets simultaneously on the seven-man blocking sled.  The episode concludes with Raiders teammates in unison, engaging the blocking sled. One person not in sync could be the difference between the ratios of ‘Ws’ to ‘Ls’ during the regular season.

Like all teams that appear on Hard Knocks, the road to a winning season is a nearly unnavigable path.  “Where’s Roethlisberger” is a tagline that is already associated with Antonio Brown in many professional sport journalism outlets.  A winning season that leads to the playoffs will be needed to make this a headline of the past.