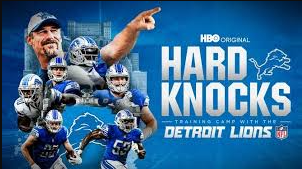 Making it to the professional level of any sports league is a monumental achievement. Blood, sweat, and tears are not a cliché collection of words for dramatic effect.  No, the aforementioned is a part of the sacrifice required to achieve high goals. For the National Football League, 32 teams compete on the gridiron to entertain millions of viewers in North America. Yes, many of these players are paid far more yearly than most people in their entire professional careers.  However, like the common person, they transcend their personal woes to execute their job. That job is to leave no regrets on that 360 feet in length and 160 feet in width field known as the gridiron. The job of HBO SPORTS and NFL Films is to capture what transpires on the gridiron, locker rooms, briefing rooms, and the personal lives of the team(s) selected to be featured on HARD KNOCKS. I have typed all of this preamble for a reason: For the 17th season of HARD KNOCKS, the featured team is only 1 of 5 teams to have a winless season, and the only franchise operational for the entirety of the Super Bowl era to have never made it. That team is the Detroit Lions.

The last rule was reiterated in a tearful end-of-practice speech by running back Jamaal Williams. After a lackluster practice concludes, Williams promises to give every fiber of his energy to this season, and he asks his teammates to do the same. We have seen all of this before: The struggling team training hard, speeches from seasoned players and coaches, and then their ups and downs throughout the preseason. Yet, it is the earnest energy from the players and staff, brilliantly captured by the film crews that keep HARD KNOCKS feeling fresh.

An article by USA TODAY listed defensive end Aidan Hutchinson as the standout thus far in HARD KNOCKS this season. Certainly, the Heisman Trophy finalist and the second overall draft pick is a key player to watch. The Lions have signed Hutchinson to a guaranteed contract of $35 million over four years. The entire staff believes that he is the real deal, and viewers will that his efforts were the best of the lackluster practice.  However, it is Coach Campbell who is stealing the spotlight. Campbell played in the NFL for 11 seasons and has several years of assistant coaching experience across the Dolphins and Saints. Campbell is as chiseled and intimidating looking as any of the players on the roster.  Not just the Lions roster, but the roster of the entire NFL. Joining a 40-repetition “up-down” exercise, the 46-year-old keeps pace with his younger counterparts.

Campbell does not fuck around but still allows the players to be themselves. The rest of the staff are also serious business, but find the time for some shenanigans. Assistant Coach and former running back Duce Staley (a legend at this writer’s undergrad alma mater) has one rule: No farting in his briefing rooms. He threatens to cut anyone from the roster that commits this unforgivable infraction. Yep, even the discharging of bodily gas is not too juvenile to be featured on HBO programming.