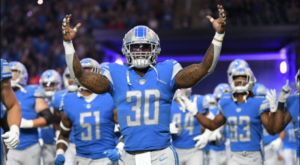 The cutting of players from rosters is a bittersweet but staple part of Hard Knocks. At the start of Episode 3, we learn that five players have been cut since the Atlanta Falcon’s preseason loss. A victory against the Falcons most likely would not have secured the axed players’ future, for preseason is not simply a prolonged warm-up tool. Preseason in the words of Coach Dan Campbell is to “get rid of that last bit of losing”. Obinna “Easy” Eze, is a rookie offensive tackle that is not having an easy time in training camp. The Nigerian hopeful comes from a basketball background, but his power and size navigated him from the court to the gridiron. Before coming to America in his teens, Easy had never seen a football. Easy appears to be out of his element, not due to a lack of motivation or physical ability. Easy has just not developed the muscle memory and dexterity needed for split-second decisions. HBO Sports never fails at presenting us with likable characters that may not make it through the short HARD KNOCKS run. 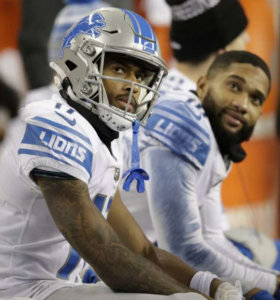 As with the previous season of HARD KNOCKS, the Detroit Lions are thus far without the controversies (i.e. the Antonio Brown debacle during Hard Knocks: Raiders) that often accompany sports programming. The Lions are mistakenly called one of the worst teams in NFL history. The blue-collar team is 25th out of 32 teams on the NFL’s win-loss record. The franchise has never appeared in a Super Bowl and has had a season without a single win. The Detroit Lions are the underdogs of underdogs. Yet, the comradery and relentless effort captured on camera is as palpable as all other teams featured on HBO Sports.

Training camp is emotional for the Lions. Players shove and shout profanities after the whistle is blown. F-bombs and other undesired word choices are more frequent than in a Quentin Tarantino script. This is because the entire organization is tired of losing. Assistant coach Duce Staley has lost his voice after utilizing his vocal cords to voice his dissatisfaction with the performance of the running backs. One running back, Craig Reynolds, shares a poignant moment with his older brother over a video call. His sibling is serving a lengthy prison sentence and has never seen Craig play. The brothers remain close, despite the physical distance and concrete prison walls.

To lift spirits, the team is treated to a comedy routine performed by Detroit native comedian Josh Adams. Adams makes quips about the size of Coach Campbell, saying he would be better on special teams than coaching; one golden-haired player is said to be Thor. Football is serious business, but a bit of R&R coupled with hijinks provides a good mental break from the chaos. 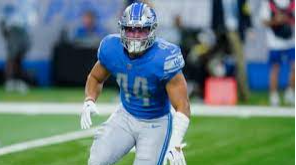 Preseason game 3. Malcolm Rodriguez continues to wreak havoc on the gridiron, putting serious helmets and padding into the guts of the Indianapolis Colts running game. The backup quarterback redeems himself for the fumble that cost the game against the Atlanta Falcons, leading a touchdown drive just before the end of the first half. From a statistic and entertainment standpoint, it appears the Lions are shutting out the Colts. Yet, the score was 13-13 at halftime and 20-20 at the start of the 4th quarter. Easy shows he is more than just potential, providing great blocks on multiple drives, leading to the third Lions touchdown. With minutes left, the Colts score a touchdown.  The score is now 27-26 for the Lions, and the Colts blow the 2-point conversion. Lions win!

Will our featured hopefuls make the roster?  The synergy is there, but do the Lions have the talent to have a winning season?  Tune in next Tuesday at 10PM ET on HBO.