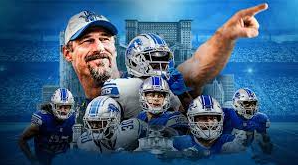 Episode 2 opens with a montage, but not the run-of-the-mill training montage expected when the subject is sports. We are treated to 1960s and 1970s footage of Detroit, with much of the time devoted to the city’s automotive industry. This is fitting, since the Ford Motor Company has a controlling interest in the team, and the games are held at Ford Field. Furthermore, the underdog, yet hard-working aura that surrounds the Detroit Lions, mirrors the blue-collar workers that built and continue to sustain the city. 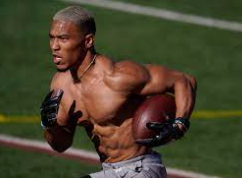 An impressive physique is indicative of an NFL player. Yet, wide-receiver Amon-Ra St. Brown (pictured) looks like he was carved and molded from steel used at the Ford Motor Company.  His hard work and being the son of a 2x Mr. Universe bodybuilding champion is a start.  St. Brown is more than muscle.  Motivated by being picked 112th in the 2021 draft, he led rookie wide receivers in receptions, receiving yards and touchdowns.  In addition to the ‘normal’ rigors of training camp, St. Brown catches 202 receptions a day, to enhance muscle memory.

In their first preseason game, the Lions fell 27-23 to the Atlanta Falcons. Defensive end rookie Aidan Hutchinson rose to the task, forcing several carries to be a loss of yards for the Falcons. The remainder of the defense left much to be desired, allowing too many 5+ carry yard plays, resulting in points going on the board.  The Lions ground game started a bit shaky, but after receiving sound guidance (interlaced with f-bombs), the yards and scores pileup for the Lions. So what happened? Leading 23-20, the Lions fumble the ball and a few drives later the Falcons score. The synergy and effort was there, the Falcons were just better that night.  Preseason games carry no merit on how the actual season will go, however losing is the outcome that the Lions organization is all too familiar. 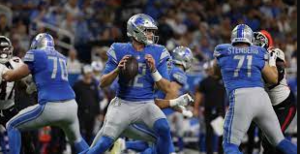 The most exciting sequence of this episode did not occur on the gridiron. It happened in a media room when quarterback David Blough watched his wife win a track and field event. Blough did not realize until the event was over, that his teammates were in the back of the media room cheering. These poignant moments never lose their luster, and will always be a staple of HBO Sports.

We have yet to be the flies on the wall during roster discussions. Only 53 spots are available, and some of these young men will either be a part of the roster, placed on the practice squad, or having to seek employment elsewhere.  The gridiron action return on August 30, 2022 at 10PM ET on HBO.