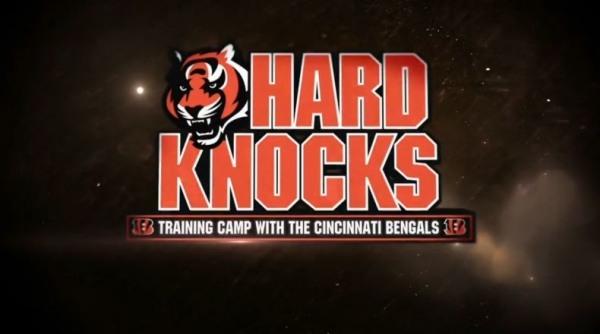 It’s that time of year again. O yes, football fans, the tortuous off-season is finally coming to an end and our favorite teams and players are strapping on their pads for the 2013 NFL season. ‘Hard Knocks’ returns to familiar territory this year, revisiting the Cincinnati Bengals after a 4 year hiatus. This Bengals team, however, is far removed from the team we saw the last time HBO cameras were rolling in Cincinnati. No more Chad OchoCinco, no more Carson Palmer, no more low expectations. Begrudged by an 0-3 playoff record in the last four years, Cincinnati looks to finally make some noise in the AFC. For some, a ‘Super Bowl or bust’ mentality is already taking root. Others have only one thing on their mind – ‘make the team.’

‘Hard Knocks’ has always been emotionally invested in young, up and coming rookies – drafted and un-drafted alike. First round TE draft pick, Tyler Eifert is showing signs of promise. Standing at a solid 6’5″/250lbs, the rookie out of Notre Dame is impressing head coach Marvin Lewis along with the rest of the Cincinnati coaching staff, making tough catches in tight spaces. How much action Eifert will see remains in question, but nothing is more comforting to an NFL Quarterback than a sure-handed Tight End. He and reigning starter, Jermaine Gresham will continue to compete for playing time as training camp progresses. The Bengals went with back-to-back offensive selections in the 2013 draft, selecting RB Giovani Bernard out of North Carolina in the second round. The slippery water bug made some noise in the first week of practice with his shifty moves and clear vision. The rookie is a natural, to put it mildly; fast, sure-handed, and determined to impress. Hot tempered RB Coach Hue Jackson sees promise in Bernard, despite taking some hard licks from a disgruntled defense.

Speaking of defense, the Bengals have made some upgrades during the off-season, acquiring infamous, long-time rival James Harrison. What’s there to say about this guy? He’s absolutely terrifying, plain and simple. The veteran LB will have to transition from the Steelers 3-4 to the Bengals 4-3 defensive scheme, a switch that hardly seems to deter his All-Pro level of play. Harrison has little love for HBO cameras, and even less love for losing. It’ll be interesting to see how Harrison’s leadership presence and ‘kill or be killed’ mentality boosts an already stingy Cincinnati defense. But every battle, whether offense or defense, begins in the trenches. For the Bengals defensive front, that battle surrounds 2x Pro Bowl DT, Geno Atkins. This monster of a man is coming off a franchise-record-breaking 12.5 sacks in 2012, meriting his 2nd consecutive Pro Bowl invitation. The potential is limitless for Atkins, entering his 4th year with the Bengals after being drafted in the 4th round out of UGA in 2010. Needless to say, the front 7 for Cincinnati is looking like one of the very best in the AFC. 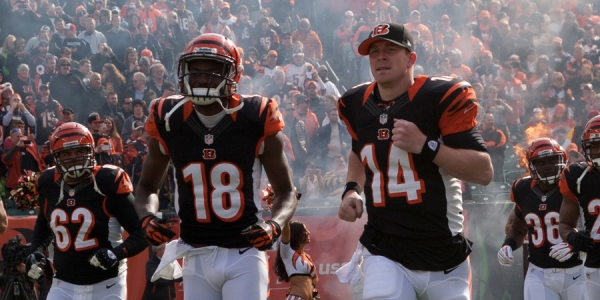 Don’t let starting QB Andy Dalton’s Pilate workout distract you – the man can play. After leading the Bengals to back-to-back playoff appearances in his rookie and sophomore seasons, Dalton is now emerging as the vocal leader of the offense. Avoiding a ‘sophomore slump’ is no easy task, but will Dalton be able to continue his hot streak for a third season? To do that, he’s going to need some help from one of the brightest young stars in the NFL – WR AJ Green. Dalton and Green were both drafted by the Bengals in the 2011 draft and have been putting on a show ever since. Green has been selected to back-to-back Pro Bowls since coming into the NFL, and is one of the most feared offensive weapons in the league. But even in training camp, players, coaches and fans are forced to hold their breath. Green went down on the first day of practice from a knee injury, eventually walking off the field under his own power. Thankfully (to Cincinnati fans), the injury is not serious, but others are not so lucky.

DT Larry Black was the unfortunate recipient of one of the most grisly injuries I’ve seen in quite some time. The un-drafted, home town kid suffered a dislocated ankle, a broken leg, and a shattered dream… for now. As lamentable as these moments may seem, in the end it’s just another day in the NFL. The very essence of ‘Hard Knocks’ surrounds moments like this – the physical and emotional pain of the game, the smashing of pads in an Oklahoma drill, the shock and terror of a fallen teammate. That’s life in professional football – raw, emotional, powerful, unsentimental and unforgiving.

Tune in to ‘Hard Knocks: Training Camp With The Cincinnati Bengals’ next Tuesday (8/13) at 10pm.