The first day that I attended football practice (I never played, only practiced over the summer), I arrived late. The corrective action was running laps after practice. Whenever someone screwed up in Navy boot camp, the fellow recruits and I were forced to do some type of cardio until our Recruit Division Commanders felt we had enough. Conversely, Cowboys Special Teams coach John Fassel, believes that running laps should not be a punishment. Fassel’s philosophy is that since players have come to the gridiron to play football, any physical conditioning is a reward.  The punishment is to be cut from the team, curtailing any future professional play unless selected by another NFL team.  It’s “Judgement Day” for many hopefuls.

The final day of practice before the regular season, is full of excitement for starters and first-round draft picks, for their positions are secure. For all others, the day is nerve-wracking. When this season’s favorites Alarcon, Diggs, Dinucci, Kamara, and Hardy are asked to wait in a conference room, we know that bad news is looming. The question is: How bad is the news? While conversing with the coaching staff, Jerry Jones tells a short story about a wagon caravan of pioneers traveling to California. The travelers are forced to burn wagons for firewood to survive the journey, meaning many of the travelers did not survive or were left behind. The analogy is quite straightforward. The wagons are the players and the players that are cut from the team and the practice squad are the firewood. The remaining make it to California, which symbolizes the playoffs.

Alarcon, Diggs, Dinucci, Kamara, and Hardy may not have made the playing squad, but all are on the practice team. Alarcon is so humble that he states his desire to be a Dallas Cowboy is so high, that he equates being on their practice quad to being selected for the roster of another team. This is due to many Mexicans and Mexican-Americans being Cowboys fans before Alarcon donned the uniform. Now more are cheering for America’s Team. 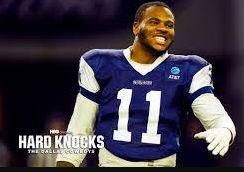 The roster drama consumes most of the episode. However, starting quarterback Dak Prescott and the rest of the team are filmed prepping for Tampa Bay, the defending Super Bowl champs led by the greatest quarterback in league history. The Cowboys are working very hard on was preparing for the Florida heat and humidity in the Texas heat and humidity. As stated in previous articles, the work ethic is there. The talent is sound. The motivation is acutely apparent. But all these attributes must flow together to bring forth their “mojo”.

Will the Dallas Cowboys have a winning season?  If so, will they make it deep into the playoffs?  This season of Hard Knocks was devoid of juvenile drama but no less interesting.  The regular season begins this week, and the Cowboys are at Tampa Bay on September 9, 2021. Thanks, Hard Knocks and good luck Cowboys.