Featured-length film production quality is indicative of Home Box Office, and this is mostly showcased in HBO’s dramas and miniseries. Hard Knocks: The Dallas Cowboys features a mesmerizing three-minute continuous shot of the 91-acre Dallas Cowboys campus known as “The Star in Frisco.” HBO’s production crew paired with NFL Films to accomplish this feat; the drone operator obtained the final shot after the 15th attempt.  The Star in Frisco is the primary setting of this week’s gridiron action.

As a precautionary measure, the coaching staff will not play Dak Prescott in any preseason games. Prescott and CC Lamb receive the most fan mail, which is delivered to the players and coaching staff by Jonathan Jackson. To this HBOWatch.com reviewer’s recollection, delving into a non-player or non-coaching person’s past on Hard Knocks is a first. Jonathan Jackson is a fourth-generation Dallas Cowboys worker. Jackson oversees mail operation and is integral to some smaller football operations at The Star. We are treated to Jackson and Prescott antics as Spades partners, besting other Cowboys players in card games.

Comradery and morale do not appear to be an issue in training camp. Nor is there the obvious troublesome talent that is a double-edged sword for the coaches 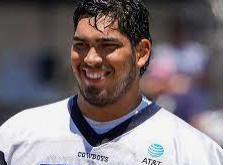 and owners. Yet, America’s Team has yet to find its stride. They are 0-3 at the end of this episode, suffering a tough, entertaining, and heartbreaking loss to their home state rivals the Texans. Using “heartbreaking” to describe a preseason loss may seem like hyperbole’, but anyone that has watched Hard Knocks knows that roster cuts are coming. Those on the chopping block are the longshots that the HBO crews have filmed with their families. Despite having a solid preseason game 1 against the Pittsburgh Steelers, Offensive Tackle Isaac Alarcon’s (pictured) future with the Cowboys may be coming to an end. It is true that the team as a whole has not found its “mojo”, but Alarcon is displaying all heart, but not the blocking prowess that the organization desires. Alarcon (and line coach Alden Durde) is from the International Player Pathway, which acquires NFL talent from non-U.S territories. English may not be Alarcon’s first language, but football is his first love. Ivory Coast teammate Kamara’s status may be numbered as well, however, the safety has had more success when compared to Alarcon. Kamara and Alarcon are fan favorites, and their possible departures will be sentimental. Backup quarterback Dinucci’s status is more promising, despite the 0-3 preseason record.

Minus the injured Prescott, the Cowboys starting line-up are all individually performing well. Yet, these premiere athletes must find their “mojo” to work together as one well-oiled machine. Hard Knocks returns next Tuesday at 10pm E.T.