Juxtaposing humor with tensions is a delicate balance. An overload of either would make for uneven viewing for audiences. Hard Knocks: The Dallas Cowboys E2 is the most entertaining episode of the series in the past decade.  The antics and stakes reached an apex on this most recent airing of HBO Sports programming.

Early into episode 2, we are introduced to defensive line coach Aden Durde. Durde, a native of Middlesex, England, played for two teams in the NFLUK, before crossing the Atlantic to have a coaching career in America. Durde has all of the mannerisms and energy of a seasoned American football coach. Owner Jerry Jones comments that Durde’s knowledge and gruff demeanor starkly contrasts his posh English accent. Durde is highly respected by his players, yet even he doesn’t escape their request for him repeating the word massage, which he annunciates to our American ears as “maaah-soge”. 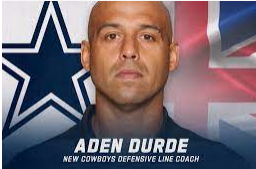 The Los Angeles Rams return, after being featured on the previous season of Hard Knocks. The Rams serve as a practice team against The Cowboys, and the attendees are treated to regular-season level gameplay. With all of the clean action, comes unnecessary roughness. If this were indeed a regular-season game, there would have been enough penalties to set a regular-season game record. Cowboys players on the sidelines lament on the unreal abilities of Defensive Tackle Aaron Donald, who at the age of 30 is already considered one of the greatest defensive players in NFL history. The practice session is memorable for its matchup and providing continuity from a previous season.

Player cuts from the 2021 Dallas Cowboys roster have yet to transpire. HBO’s gridiron series has had roster cuts to be one of the most common yet poignant moments of its 20 season run. Eschewing the expected scenes of coaches and owners having a round table discussion of who is getting the ax, episode 2 of Hard Knocks: The Dallas Cowboys takes the cinematic approach. Narrator Liev Schreiber’s mid-Atlantic voice assists in building tension when expounding the words “cuts are inevitable”, and then we are thrown into one of Hard Knock’s most memorable preseason games. The Cowboys experience a heartbreaking close loss to the Arizona Cardinals. Despite being a preseason game, this game was a showcase of backup and practice squad personnel’s skills to earn their keep. The shortcoming was partly due to a missed holding call against the Cardinals. Linebacker Azur Kamara was illegally held during a play. In a previous play, Kamara sacked the QB, yet a false start was called, nullifying the excellent play. Kamara escaped civil war from the Ivory Coast to make the Cowboys practice squad. His family was present to see his first game, and this young man along with backup quarterback Ben DiNucci, is potentially on the chopping block for roster cuts.

The journey of all the players have been arduous, yet some may or may not have longer to go with the Cowboys franchise. America’s team returns at 10pm ET on August 31 and subsequent Tuesdays. This is Hard Knocks: Dallas Cowboys from HBO Sports.