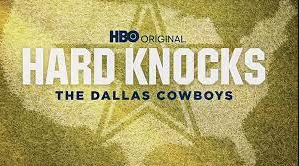 Baseball was the first sport that I learned and deeply respected. It is called “America’s Pastime.” But some would argue that Football holds that honor. The Patriots and Steelers have won six Super Bowls each, and the 49ers, Packers, Giants, Broncos, and Cowboys are National Football League teams that have four or five Lombardi trophies. Regarding that Dallas team, it is unofficially but widely recognized as “America’s Team”  So how did America’s Team end up on this season of Hard Knocks?

As always, HBOWatch reiterates the criteria to be on HBO’s Hard Knocks sports series.

A hallmark of Hard Knocks is that one controversial player; that player whose antics might slightly outweigh their phenomenal athleticism. That player has not emerged thus far for this team. However, the controversial person may not be physically partaking in gridiron action, but rather pulling the strings behind the 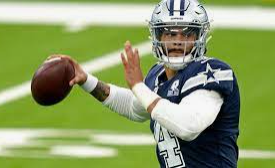 scenes, or rather behind an expensive oak desk. The Dallas Cowboys is owned by the infamous Mr. Jerral “Jerry” Jones. Jerry Jones controversially fired the last coach that led Jones’s franchise to a Lombardi Trophy. Jones had little screen time in the first episode, but his presence was acutely apparent. The owner’s attention is homed in on the status of starting quarterback Dak Prescott (pictured). The opening shot of the episode contains a series of close-up shots of Prescott’s surgical scars, which were the result of a compound fracture from the previous season. Jones, the team doctor, and head coach Mike McCarthy consult with doctors from The Texas Rangers and New York Yankees to safely reintegrate Prescott into passing drills.

A memorable montage of practice drills is expertly captured and scored by HBO Sport’s production crew. The catalyst for this was a speech that Coach McCarthy

derived from a movie scene. One would think that the scenes were from a sports or military movie. Of all films, McCarthy reference Austin Powers: The Spy Who Shagged Me. McCarthy wants his team to get their ”mojo” back. I could insert the obligatory Dallas Cowboys burn by stating when in the 21st Century have the Cowboys had mojo? Nothing of the criteria to be on Hard Knocks is indicative of mojo. However, McCarthy helmed a championship Green Bay Packers team, the Cowboys roster is not too shabby, and the franchise has money.  Lots of money.  Where mojo fails, “moola” will be used to compensate.

Everything is said to be bigger in Texas. Are the expectations of America’s Team too big? Hard Knocks debuted Tuesday, August 10 across HBO’s platforms. It returns to the gridiron on August 17, 2021 at 10pm ET and subsequent Tuesdays.

America’s Team is back and so is Hard Knocks, as the show celebrates 20 years of examining how the big boys play. Are you ready for some football action?