Midnight December 31, 2019, brought forth the countdown to 2020, a year that will go down as one of the most abysmal periods in recent human history.  As with all New Year celebrations, resolutions and catchphrases for 2020 flooded airways and social media platforms.  One catchphrase was “The New Roaring 20s”. The 2020s thus far have brought the world hurdling into the unknown.  For the Los Angeles Rams and Los Angles Chargers, they are venturing into the unknown as the 2020 preseason concludes and the 2020 regular season begins. 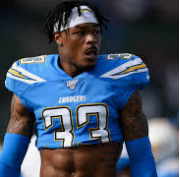 As with all season finales of Hard Knocks, the episode features those who did not make the team roster.  Fortunately, the Chargers and Rams have a few spots on their practice teams, but the selectees are warned that they will have to work even harder to justify their presence. Darius Bradwell is a running back that matriculated unto the Charger’s practice squad.  Bradwell, is now 25 lbs. lighter and swifter on his feet. The coaching staff laments his progress but urge the young running back to stop trying to run like a corvette, and run like a muscle car.  Knowing your skill set and how to utilize that skill set is equally important to work ethic and natural abilities.

When the Chargers lose running back Derwin James (pictured) to a torn meniscus, morale plummets. James is much more than his incredible raw talent. He is an on-field and off-field motivator, who urges his team to not ignore America’s societal issues, yet to remember that ultimately, they are in the NFL to deliver incredible gridiron play for paying audiences. The back-up running backs show great potential and enthusiasm to fill the void, but the talent James holds will be difficult to substitute.

The Rams are currently injury free, but their morale appears to be lower than their other Los Angeles counterpart.  This could be due to the HBO crew capturing more somber moments by chance; however, it is acutely apparent that the social unrest is getting to many of the players, including head coach Sean McVay.  This is where HBO Sports has always shined: Showing the tricky balance of the professional and personal lives of those who give the world grand athletic entertainment.  NFL players seem unfazed save for injuries on average, yet this season features a pandemic and social unrest that is affecting every corner of the United States, and the rest of the world.

This 2020 regular season will be anything but regular. The Rams and Charger will join the rest of the NFL by hosting games in mostly empty stadiums. The lack of ticket sales will certainly curtail profits, and some non-essential to the team, but essential to the individual, jobs will be axed. This is the current ‘new normal’. If Hard Knocks returns in 2021, we hope for a better normal to have returned.

Note: The LA Rams opener is away against the Dallas Cowboys on September 13 and the LA Chargers begin their season opposite the  Cincinnati Bengals the same day at home.