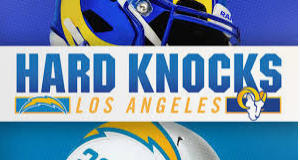 Episode 4 of HBO’s long-running preseason gridiron series covers much terrain. We see the players’ and staff’s reactions to roster cuts, the ensuing pandemic, and social unrest. The opening frame captures Rams Head Coach Sean McVay conversing with the director of communications, Artis Twyman. McVay and Twyman have just viewed the shooting of Jacob Blake, who sustained seven gunshot wounds during an encounter with Wisconsin police officers. In Chargers training camp, the topic of police brutality is also second only to football.  No matter what one’s political and/or social stance leans, the turmoil of unresolved issues hits the players harder than the most powerful offensive and defensive tackles. 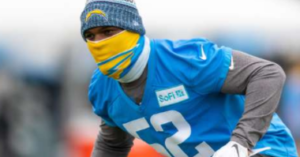 The coronavirus has sidelined several players and staff from the Rams and Chargers; however, no update was provided this episode for those who previously tested positive.  When the actual season begins, the number of casualties may be higher, for those that test positive for COVID-19 will be quarantined.  Our first non-pandemic casualty occurs in this episode. During a seemingly routine hot route play, Chargers wide receiver Mike Williams sustains a groin injury that sidelines him for an estimated three weeks.  His replacement does well in practice sessions but despite the old “we train as we play” saying, there is a night and day difference between the controlled practice environment and season games.

As with every season, we are shown those players that have the willpower and fortitude to be NFL material but may or may not have the divine given talent.   This time, the scenes of praise, scrutinizing, and the dreaded “if we only had more room on the roster” speech are inter-ut with footage from Chargers head coach Anthony Lynn’s career.  Lynn was a long shot himself but proved himself worry on the Denver Broncos, even winning a Superbowl.  In a tour de force of athletic showmanship, Lynn, a former running back, challenges his running backs and fullbacks to a contest of jumping obstacles into the imaginary end zone.  Most can clear three stacks of obstacles; however only Austin Ellet can clear five.  Although this does not equate to predestined superb on-field performance, Lynn states that this feat is Ladanian Tomlinson territory, who is considered one of the greatest running backs in NFL history.  Ultimately, two defensive rookie players are cut from the Chargers to make room for two linebackers.  There simply are not enough spots, even for the hardest working players.

The episode concludes on a somber note. As the NBA and MLB have their strikes (which normalcy has since been restored), the question arises: What are we to do?  Heartbreaking stories of those from older generations are told; much as changed in America, but not enough. The coaches of the Rams and Chargers all agree that they are there to play football, this is the number one priority, and this will never change. However, the coaches, players, and staff also concur that they platform at their disposal should not be taken lightly.  Ultimately, both Los Angles teams decide to cancel their scrimmages and use the NFL network to voice their reasons for the canceled scrimmage(s).