This week’s opening features an ass-chewing by the Chargers offensive coordinator Phil Mcgeoghan, which reminded me of my first day in Navy Bootcamp.   The coordinator wants his players to block, and not only aim to get open to be a third wide receiver.

The days are approaching when players can finally don helmet and pads. In one sequence, the narrative shifts back-and-forth between Rams and Chargers reminiscing on the days they wore full gear. They miss the contact and the synergy that it brings. As the contact begins, the Chargers offensive coordinator continues to harp on players about blocking. He tells them to imagine that the advancing defensive player is attempting to kill your child. Furthermore, he states that he is tired of repeating himself, for he has reiterated the importance of 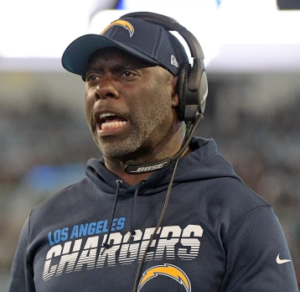 blocking as a ‘gentleman’ and as a ‘dick’. Chargers head coach Anthony Lynn (pictured) notices the same issues while watching practice footage in his office. Lynn firmly states “if you don’t block for me, you won’t play for me”.

Keenan Allen, a seven-year veteran and 3X pro bowl selectee, not only catches nearly all passes thrown on his side but is dedicated to blocking, much to the approval of Mcgeoghan. His extrovert personality is analogous to his athletic skills.  On the Charger’s defensive side cornerback Chris Harris is the liveliest talent and personality. It is revealed in archival footage, that Keenan Allen and Chris Harris squared off in a highly entertaining match-up in the 2019 season, the season when Chris Harris played for the Denver Broncos. We see their rivalry on the practice field, and it is a masterclass in coverage and route running.  In a tranquil scene, Harris goes home to tell his wife about the friendly rivalry he has with Allen.

The Rams players and staff visit SoFi Stadium, a new entertainment complex that will host their (and the Chargers’) home games. The $6 billion stadium cannot host any spectators in the foreseeable future. Every season of Hard Knocks features that long-shot player that we 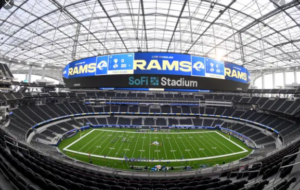 hope will make that cut. This year’s long-shot is 7th round pick linebacker Clay Johnston.  Johnston is not the most skilled player on the practice field, but he is certainly one of the most hardworking and motivated. He is well liked by the player and staff, but as always, there are never enough spots for everyone in the training camp.

10-year veteran Tyrod Taylor is the starting Chargers quarterback, even though the team used their first-round pick to draft a quarterback. Taylor knows that his starting position is not etched in stone, and he is enthusiastic about not only increasing his athletic prowess, but also his field awareness. In one instance, he commandeers the coach’s laptop to go over plays with his teammates.

Unlike Rams cornerback Jalen Ramsey, Chargers outside linebacker Melvin Ingram openly voices his annoyance with his current contract. Ramsey refuses to engage in contact on the practice field until his contract is updated. It is suggested that he is holding out to receive a lucrative deal akin to friend Joey Bosa.  However, Ingram’s performance has been declining in the past few seasons, as Bosa’s performance has peaked. Ingram and Bosa appear to have a great friendship, and Ingram is on the sidelines providing feedback to Bosa and other teammates. Well, Ingram’s passiveness on-field transforms into effective aggressiveness when he is awarded a contract extension

that guarantees $14M.Ingram wants to secure his future, and this chunk of change will certainly help.

The episode concludes with the Rams practicing in SoFi stadium. The stadium’s monitor is so mesmerizing that it distracts everyone between plays. Hard Knocks narrator Liev Schreiber laments on Arron Donald’s presence and prowess.   Remember, that Donald lifted running back Devonta Freeman off his feet like a baby (literally) during a scuffle in the 2019 season.  Donald’s tackles remind us that the term ‘hard knocks’ is not just for dramatic effect.

Hard Knocks returns to the scrimmage line next week, Tuesday, September 01 at 10:00pm .