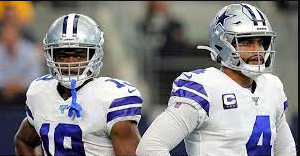 The eighth entry of Hard Knocks In Season opens with a non-linear approach, going back to just before the start of the regular season. We are on an immaculate golf course in early September 2021. Starting QB Carson Wentz and rookie QB Sam Ehlinger are enjoying a round of golf on Grand Park in Westfield, the official name of the Indianapolis Colt’s training facility. A long drive by Ehlinger causes the ball to ding someone’s Range Rover. Amused yet slightly concerned onlookers decide to move their vehicles. The beginning of the fall season and the NFL regular season is tranquil. Transitioning into the present, the Colt’s spirits are still high despite the new normal with COVID-19.

Center Ryan Kelly returned from bereavement leave. Kelly’s teammates have greatly missed him personally and professionally. The first practice of the week went poorly. So poorly that all-star Darius Leonard pointed the finger at himself and asked his team to have the mindset that every player is expected to execute game-winning football.  The subsequent practices were indicative of a team that wants to clinch the playoffs.

The Omicron variant is taking a heavy toll on all rosters, especially the Colts. Last week, four of the eight losses on the roster were due to some form of COVID.   Wentz tests positive for the virus and Ehlinger may have to start against the Las Vegas Raiders. The Raiders and Colts are in a near identical playoff situation, but a win for the Colts would secure a playoff spot. The Colts have their manning issues, however the Raiders are in a scandal plagued season:

Carson Wentz was cleared by NFL protocols and started against the Raiders. Wentz has been solid all season, but struggled against the black & silver opponents.  Wentz finished 16-of-27 for 148 yards and one touchdown. The Raiders drew first blood with an early touchdown and their defense rattled the Colts’ offense for the first half.

The Colts saw more success in the second quarter, eventually tying the game 20-20. In a rare instance of wanting the opposing team to score, the Colts want a questionable reception to be ruled a touchdown. The reason? A touch down late in the game by the Raiders still gives the Colts a chance to score again, forcing overtime. The call is overturned, and the Raiders run down the clock and kick a field goal for the win.

The Colts still have a chance for the playoffs, but this win would have guaranteed post season play.  The Colts face the Jaguars for the final game of the regular season.  Do or die. Hard Knocks In Season returns January 12, 2021 at 10pm ET. The results of the outing against the Jaguars and the standings of other AFC teams, will determine if the Colts will make the playoffs. If they do this HBO series continues and so do these reviews.