With three games remaining in the regular season, the quest for the Indianapolis Colts to go 1-0 for the second half of the season is becoming a strong possibility.  The three remaining games are crucial for the Colts to clinch the playoffs. Coach Reich’s “1-0” slogan has been adopted into song. The opening of Episode 7 of Hard Knocks In Season features director football research John Park’s freestyle rap. And well…it is something.

Started at the bottom but responded with some better play

Satisfied, something we would never say

Single minded, all we know is 1 and 0

JT gonna truck him for that touchdown

Dominate the competition every day

Ready to bust these doors down, one percent better but must

We fear God not anyone we play

Colts gonna run the table all of the way

Whether these lyrics hit home for listeners or not, it is impressive that a staff member can incorporate so many team members into a song. The camaraderie of the Colts is entertaining and magnificent. 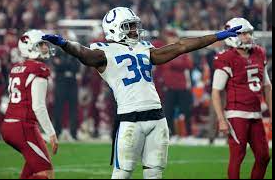 This past Christmas, the Colts defeated the Arizona Cardinals 22-16. A defeat would have placed the Colts in an AFC wild-card race. The Colts were hit hard with personal matters, illnesses, and injuries before and during their matchup with the Cardinals. Center Ryan Kelly is on bereavement leave. One player is out due to contracting the Omicron Covid-19 variant. Left tackle Eric Fisher and tight end Jack Doyle avoided serious injuries but were hurt enough to not be able to continue against the Cardinals. Yet, the Colts remained undeterred.  Carson Wentz threw for 225 yards and Jonathan Taylor rushed for over 100 yards. The Colts defense held the Cardinals to only one touchdown pass.

The Colts are on a three-game win streak and boast a respectable 9-6 record; which is a far cry from their 1-4 start. Going back to Coach Reich’s 2021 slogan and John Park’s freestyle:  All We Know is 1-0. The willpower, synergy and relatively low drama within the Colts make them a formidable opponent. Fans, coaches, and other players made it known that the Colts are a strong team by selecting six Colts players to the Pro Bowl, leading the NFL in Pro Bowl selections.

Next up for the Colts are this writer’s beloved Las Vegas Raiders, a team in a similar playoff-clinching situation. Hard Knocks In Season returns in the New Year on January 5, 2022 at 10pm.