I have enjoyed watching the journeys of all the teams featured on HARD KNOCKS. Yet, not since the 14th season (2019 with the Raiders) of HARD KNOCKS have I had such interest in this marvelous series. I am not a die-hard fan of the Indianapolis Colts, yet I was one of a few deployed Sailors rooting for them at Superbowl XLI. This 2021 season is hardly analogous to the Colt’s 2006 Superbowl victory season. However, the chances of a wildcard and/or playoff spot is a bit brighter after their most recent win. 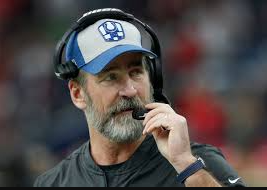 Head coach Frank Reich (pictured) stands before his team, giving one of several obligatory speeches in the days leading up to a season game. Coach Reich holds a copper grounding rod in his hand, pragmatically illustrating the science behind metal conducting electricity. Coach Reich states that the team must act like the grounding rod: Direct positive energy in the right direction. Coach Reich has a deniable history of bringing teams out of seemingly insurmountable odds, as a college quarterback, NFL quarterback and NFL Coach. On November 10, 1984, with the Miami Hurricanes leading 31-0 at halftime, Reich entered the game and led the Maryland Terrapins on multiple scoring drives. Maryland won the game 42-40, then the biggest comeback win in NCAA history. In 1993 but Reich then led the Bills on a 38–3 run en route to a 41–38 overtime victory over the then Houston Oilers (now the Tennessee Titans). The rally from a 32-point deficit remains the largest comeback in NFL history. Just last year, Reich led the Indianapolis Col Their latest win also had high drama, however largely in favor of the Colts.

The Indianapolis Colts put on a masterclass of defense and offense against the Buffalo Bills on November 21, 2021. In frigid rain, the bulk of the offense was executed by Colts star running back Jonathan Taylor, scoring five touchdowns. Taylor became the first player in NFL history to record 175 or more rushing yards, four or more rushing touchdowns and one receiving touchdown in the same game. The NFL/HBO film crews caught this exciting action as well as the equally 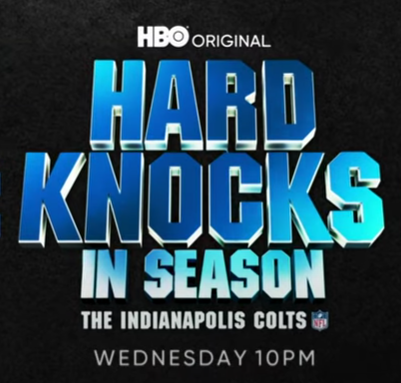 engaging interactions on the sidelines. Darius Leonard is seen running up and down the sidelines cheering and providing direction to his team. Leonard’s playing season is in question, for when asked about his ankle, he states “It’s attached. That’s about it.” The statement is cold and troublesome in contrast to the Colt’s first win of the season over a team with a winning record.

The episode concludes with a quasi-gag reel. We see Colts players dancing when they should be practicing. Coach Reich accidentally activates SIRI on his smartwatch while going over plays in a team meeting. An assistant coach rants about the young buck’s choice of music, all the while humorously acknowledging that his dislike of today’s rap music is due to his age.  HARD KNOCKS IN SEASON returns December 1, 2021 at 10pm ET on HBO.