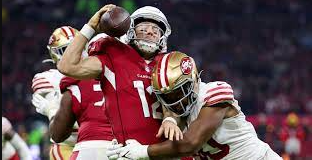 With a now 4-7 record, the Arizona Cardinals have six games remaining in the 2022 NFL season. Although not the worst in NFC West (that unwanted stat belongs to the LA Rams), the Cardinals’ playoff prospects look grim. This past week, a thrashing was bestowed upon them by the formidable San Francisco 49ers. The gridiron action transpired in Mexico City’s Estadio Azteca. 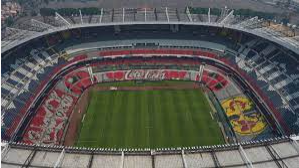 Estadio Azteca frequently hosts football (soccer for us uncultured Americans) for the Mexico National Football team and has hosted 17 World Cups. Equally, Estadio Azteca is no stranger to American sports and has hosted one NFL game per season since 2016.  The showdown between the 49ers and the Cardinals was a treat for ticket holders.  Mexican Citizens are fans of west coast NFL teams, and some Americans make the hike south to see their favorite team(s) play on foreign soil. The Spanish and English cheers from the fans, and the English and Spanish color commentary created one of HBO Sport’s most memorable coverages of an NFL game.

The first quarter was solid for the Cards, their defense shut down San Francisco’s feared rushing game. The Cardinals remained focused for the remainder of the game, but their talent cannot match their opponents. The 49ers systematically shook off their coverage and racked up yards; yards that led to touchdowns; touchdowns that led to victory. Even the team’s hype man, leader, and star safety Budda Baker is speechless.  Baker and his team were poised and motivated, but injuries and good but not great talent will not beat poised, motivated, and simply better opposition. 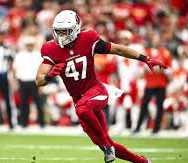 Despite the loss, the Mexico City experience was enthralling for many of the Cardinals Players. Offensive Guard Will Hernandez was not able to play in the game, due to an injury. However, Will invited several family members to the game, and he ran on the field with the Mexican flag before kickoff. The loss was also painful for cornerback Antonio Hamilton.   This game was a return from a potentially career-ending injury. An injury that was sustained not on the gridiron, but in Antonio’s kitchen while preparing a shrimp entrée for his family. Antonio sustained 2nd-degree burns on his feet and superficial burns on his face. After several skin grafts, the safety is back in the lineup. 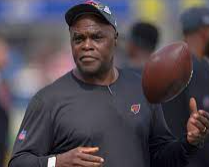 HBO does not shy away from controversy, but vague information was provided on the sexual assault allegations against running back coach James Saxon (pictured) and assistant coach Sean Kugler. Both coaches have been fired, and Kugler’s alleged incident happened in Mexico City. Perhaps due to the incident still being investigated, HBO Sports and NFL Films decided not to allocate much time to the controversy. Nevertheless, the loss of players due to injuries and losing coaches due to legal action is detrimental to this organization.