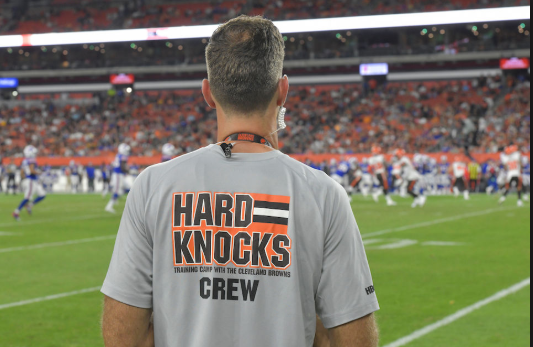 In two months, the National Football League will conduct its 100th season and 84th player draft. Teams with the most abysmal records last year will have first look at the most coveted draft picks. Although hailing a previous losing season is not the end all criteria to be selected for HBO Hard Knocks, teams that have a snowball’s chance in hell of going deep into the playoffs, seemingly are the primary candidates for HBO’s premiere gridiron series. But HBO’s selection process is far more intricate.  Hard Knocks debuted in 2001 and throughout the seasons, it became increasingly difficult for teams to willingly participate with the premium cabler. Therefore in 2013, the NFL announced that in the absence of a team volunteering to participate in Hard Knocks, the league could force a team to participate. Teams are exempt from being forced to participate under three circumstances:

(1) The team has appeared in the past ten years

(2) The team has a first-year head coach

(3) The team reached the playoffs in either of the two preceding seasons.

This leaves five franchises that are candidates to be featured in the 2019 season of this reality sports series.

The Lions are led by a coach in Matt Patricia who comes from the Bill Belichick school of being uninteresting.  Though, it might be entertaining watching him spend too much time choosing which pencil or pen to stick in his ear before leaving for work, in turn causing him to be late for meetings.

The Lions do not boast a particularly interesting roster, either. This could change with scouts scouring the fields watching the upcoming NFL combines, a showcase for collegiate players to show that they are professional football material.

The 49ers might be the team on this list with the best potential to make a leap forward into playoff contention in 2019, plus there’s the added intrigue of quarterback Jimmy Garoppolo coming back from an ACL injury. They’d move up higher on the list, too, if they managed to sign someone like Le’Veon Bell. In short, the Niners are a dysfunctional band of gridiron brothers.  Dysfunction breeds drama, which creates entertainment on a show like Hard Knocks.

Furthermore, it would be interesting for viewers to have a fly-on-the wall perspective on a team that struggles with its mechanics and public perception.  Although the Colin Kaepernick kneeling controversy has subsided, the 49ers have faced, and still face fans that are polarized over the notion of kneeling during the National Anthem. Some ticket buyers and watchers have praised the situation, and some have resorted to burning jerseys. Kaepernick has been separated from the 49ers for over two seasons, but the remnants of his actions still loom.

The Redskins are another troubled franchise in the NFL, and they’ll have to spend much of next Hard Knocks season having to explain themselves for signing Reuben Foster despite his problematic off-field history. Additionally, they have difficulties at quarterback with Alex Smith’s health, an oft-derided owner in Dan Snyder, a Gruden brother (Jay) and an interesting fan base.

The Giants have the most star power on this list. Many would pay to watch even just a series that followed Saquon Barkley and/or Odell Beckham Jr. Then there’s the added intrigue of Eli Manning potentially returning and/or the addition of a new quarterback (rookie or veteran) to build around.

Plus, viewers would be able to watch the Giants attempt to explain themselves around Manning’s continued presence on the roster without the full force of the media around to question them.

The Oakland Raiders change coaches as often as undecided voters before a primary election. Previously, Jon Gruden was the Raiders coach from 1998-2001.  Jon Gruden’s tenure has been nothing short of … interesting. For, Gruden was the last Raiders coach to lead the team to a Super Bowl, which ended in defeat to the Tampa Bay Buccaneers.   Now Jon Gruden must turn around a franchise that had had mostly losing seasons since the Super Bowl loss. Now an NFL Network analyst (Mike Mayock) is their general manager. The Raiders are on the verge of moving to Las Vegas and will add three first-round rookies into the fold.

The Raiders might be more appealing for the NFL by being showcased on Hard Knocks in 2020 when they actually move to Vegas, especially since they probably won’t make the playoffs in 2019.  Yet, this train wreck of a team would still be entertaining to watch now.

Who do you think will be selected to be on Hard Knocks for this season? The chosen team usually is announced in April so we will keep you posted.