Episode 2 of this season of Hard Knocks features much more of the player’s personal lives, versus their athletic activities. Initially the Chargers continue to report no new COVID-19 cases; Rams linebacker Andrew Whitmore tests positive. Whitmore’s entire immediate family all tested positive.  Fortunately, their worst symptom was the loss of taste and all seem to be on their way to a full recovery. Fellow linebacker Terrel Lewis also remains quarantined.  As injuries and legal issues are the usual culprits in hampering a team’s line-up, a virus strain is now added into the mix. Imagine a team getting deep into the playoffs and a star player contracts the corona virus. It could likely happen.

Rams cornerback Jalen Ramsey is accompanied by his girlfriend to tour Los Angeles mansions for sale. Although there have been no updates on Ramsey transitioning from his rookie contract to a more lucrative contract, on the surface it appears that the talented player is not worried about his pockets. Ramsey is much less animated this episode, for he is not being badgered with questions by journalist attempting to pressure him to divulge confidential answers. 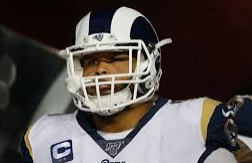 Just when the Chargers thought that they were COVID-19 free, quality control coach Seth Ryan tests positive. This is very disturbing for the Chargers, for it is widely reported that Seth Ryan practices social distancing on and off the field. In a soap opera like twist, Ryan’s results are confirmed to be a false-positive, and he resumes coaching duties with the team.

Having the gridiron action take place across two Los Angeles NFL teams is quite innovative and overall a welcomed change. However, this reviewer often gets whiplash with the back-and-forth changing of perspectives.  Often, I have to wait until I see a team logo or the narrator to mention the said team’s name to know who is on screen.  Nevertheless, the format will certainly not deter avid football fans from catching up on the latest endeavors of the LALA Land’s professional football team franchises.

Although this is the most unique set-up in memory of this long-running HBO Sports series, it is at times quite lackluster. Although it is seemingly immature for one to yearn for on field drama, the lack of action on the practice field is entirely noticeable. The synergy between the coaching staff and the players is a casualty of the pandemic. The HBO filming crews are primarily documenting the fallout of the pandemic. This is unavoidable for the entire globe as had to make adjustments. If the actual NFL season is analogous to this year’s Hard Knocks, one may question if the season should have been cancelled.  I am cautiously optimistic that Hard Knocks will liven up for its remaining episodes.