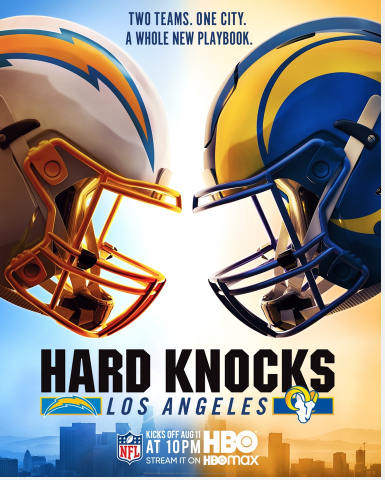 Episode 1 of Hard Knocks: Los Angeles, has everything that we expect of HBO’s 15-year running gridiron series. There is the serious business of training camp, where the skills of the players are honed for the upcoming season. We feel the pressure of second and third-string players putting up their best efforts to secure a spot on the regular season roster. Yet, this season two additional layers are added; two teams are featured (the Los Angeles Rams & the Los Angeles Chargers) plus the uncharted territory called the COVID-19 pandemic.

The opening of the episode is of the staff and players of the Los Angeles Chargers being tested for the virus. There is much humor to be found in men that can bench press 2.5 times their body weight being afraid of needles. Some of the players actually whine about the nasal swab to take cultures for the COVID test. Fortunately, most are supportive of all of the precautions to limit the spread of the virus.  With American football being the quintessential contact team sport, it is ironic that social distancing is still managed to be practiced. The coaching staff don masks on and off the field, likewise the players follow suit off the field. Despite all of the precautions, linebacker Terrell Lewis tested positive for COVID-19 and had to be quarantined. Lewis will workout from home to maintain his conditioning.

During a Chargers’ teleconference, we continue to see the effects of the virus, yet an old but indispensable issue arises. The team discusses the controversy over protesting police brutality.  The consideration for both sides of the argument is unparalleled and our own government officials from the left and right could take notes.   The tough discussion of race and social issues seemingly should stay out of sports, yet our players are only human.  And the human condition is something that transcends all professions. 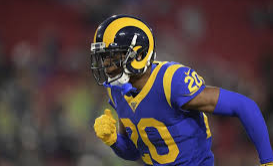 Each season of Hard Knocks features that one player that sirs the pot. That player whose lively personality and antics, outshine their highly coveted skillset.  Last season was that darn Antonio Brown. This season that player could be Rams cornerback Jalen Ramsey. Known as a ‘shutdown corner’ for his ironclad defense, Ramsey is not afraid to speak his mind.  However, he appears to me far more mature than the previous boisterous players featured on this HBO Sports series.  It is a well-known fact, that sports journalists attempt to goad players into arguments when said journalists do not get the answer they are seeking. During a teleconference, Ramsey is pressured to discuss the likelihood of receiving a new contract. Ramsey is still under his rookie contract, which means he is underpaid in comparison to his worth. Ramsey insists that he is not worried about the situation, for his agents will take care of this matter.  He grows frustrated from the onslaught of contract questions, and abruptly leaves the meaning.  He returns after encouragement from teammates, but retorts with a strong but articulate stance on respecting his wishes to stick to football questions, vice business and monetary concerns.

This unprecedented season features two LALA Land teams, in the midst of a nation that has social issues galore, and a worldwide pandemic.  The stadiums will not be filled with spectators, but this season of Hard Knocks is certain to be a spectacle. HBO Sports presents  Hard Knocks: Los Angeles Tuesday nights at 10:00pm on HBO.