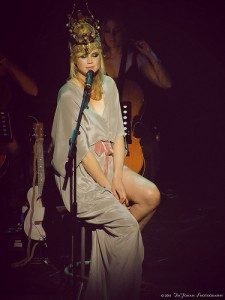 Gwendoline Christie has been cast as Brienne, the Blue Knight in Game of Thrones season 2.  George RR Martin, author of A Song of Ice and Fire, of which A Game of Thrones is based, often gives casting clues on his blog which updated with a post titled ‘I’m Blue” this afternoon.  Speculation ran wild about what the cryptic message meant but within hours, commenters on WinterisComing.net and Westeros.org concluded that only British actress, Gwendoline Christie could fit the given clues.

Warning!  MINOR SPOILERS AHEAD: Brienne Tarth is the only daughter and heiress of Lord Selwyn Tarth of Evenfall Hall; she had three siblings, none of which survived childhood. Larger and stronger than most men, Brienne is a skilled warrior and longs to be a knight. She has an awkward personality, but is also honest and stubborn. She holds a naïvely idealized notion of knighthood despite the insults she receives from many knights, who call her “Brienne the Beauty” to mock her ugliness. She is also known as “Brienne, the Maid of Tarth”, but her most common and neutral nickname is “Brienne of Tarth”, as she is both from the House and island of Tarth.

The 6’3” actress posed for a series of photos that explore femininity and deconstruct the idea of the Playboy bunny girl.  Seems like she’s a perfect fit for HBO!  We can’t wait to see what she does with her new role!