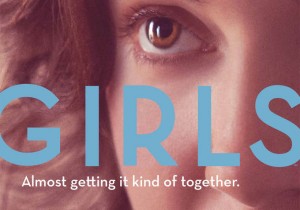 If you’re anything like me, you’re waiting (impatiently) for a premiere date to be announced for Girls, Season 3. While you’re waiting, why not check out the  Girls: The Complete Second Season on DVD/BluRay? Not only does this set have some excellent Bonus Features, but now you can invite your girlfriends over, stock up on Ben & Jerry’s and give each other pedicures while you marathon all the episodes of Season 2. Come on, you know you want to! Whether you want to laugh, or cry, Season 2 is overflowing with issues and awkwardness… and a little karaoke tossed in for good measure.

The DVD Box set includes two discs, Disc One containing Episodes 1 – 5 plus three Bonus Features, Disc Two includes Episodes 6 – 10, plus three Bonus Features. Total run time is 390 minutes and subtitles are available in English, French, Spanish and Portuguese. The BluRay set includes a third disc, featuring more Bonus Features, including deleted scenes and two musical features. The attractive box set features the Season’s “Almost kind of getting it together” soft focused poster as the cover image, with simple typography and soft blue trim. The simple, clean theme continues in the graphics for the menu screens on the discs, and the softly filtered scenes in the menu loop, as well as the stills of the cast are really lovely.

Episode 1 – “It’s About Time” –  Hannah has moved on from Adam, romantically, however, we find that she is still nursing him while his broken leg heals. Marnie loses her job and finds herself lost as to what to do with her life. New roommates, Hannah and Elijah throw a party together, during which Shohanna and Ray get back together, Elijah fights with his boyfriend George, and ends up having sex with Marnie. Jessa and Thomas John return from their honeymoon to embark on their “real” life together.

Episode 2 – “I Get Ideas” – Hannah’s sexual relationship with a black man teaches her that she might not be as PC as she’d thought, especially after Sandy is unimpressed with her essay. Adam records himself  singing songs of love for Hannah, but his compositions turn out to be more creepy than romantic. Jessa and Thomas John revel in post-honeymoon bliss, causing Hannah to begin to wonder if she, herself, is actually happy. Marnie realizes it’s time she reconsiders her career options and Elijah comes clean to George.

Episode 3 – “Bad Friend” – Hannah gets a freelance writing opportunity and asks her ex-junkie neighbor, Laird, for help finding cocaine. Laird gets Hannah the coke, which she and Elijah snort together, before going out to dance the night away. Marnie runs into Booth Jonathan, which leads to a sexual encounter at his apartment. While clubbing, Elijah tells Hannah that he and Marnie had sex, which ruins Hannah’s high. Hannah confronts Marnie at Booth Jonathan’s apartment and accuses her of being a “bad friend.” She then informs Elijah that he’s no longer her roommate, before returning home to have sex with Laird… for the sake of her article, of course.

Episode 4 – “It’s a Shame About Ray” – Hannah throws a “grown up dinner party” in celebration of her freelance article, however, her friends can’t seem to behave like grown ups. Marnie fights with Audrey, her ex-boyfriend Charlie’s new girlfriend, before Charlie makes an unexpected move. Shoshanna comes to the shocking conclusion that Ray is actually living with her, resulting in a heart to heart in which Ray confesses he’s in love with her. Jessa’s disastrous dinner with Thomas John’s WASPy parents leads to the two fighting and ending their marriage.

Episode 5 – “One Man’s Trash” – While working at  the coffee shop, Hannah is upset when Ray informs her that she has not, in fact, invented the word “sexit.” Their discussion is interrupted by a neighbor of the shop, Joshua, who confronts Ray, telling him that someone has been throwing away the coffee shop’s garbage in his cans. Hannah follows him home to apologize, explaining that she’s the culprit, and that it’s been strangely pleasurable putting the trash in his cans. Bizarrely, Joshua invites her in and they have an affair, which causes Hannah to look at her life in a very different light.

Episode 6 – “Boys” – Adam steals a dog, so Ray journeys to Staten Island with him, in order to return “Dog” to his rightful owner. On the trip, they discover that they might have more in common than they thought. When Ray is ultimately abandoned by Adam, he breaks down, showing us that he’s not as tough as he appears. Hannah lands an e-book deal, but her excitement quickly wears off when she realizes she’s got a deadline and no ideas. Marnie is sleeping with  Booth Jonathan and hosts his art party when his assistant quits, so it comes as quite a shock to her when he informs her that she’s not his girlfriend. Hannah attends the party, but doesn’t fit in with Marnie’s new friends.

Episode 7 – “Video Games” – Hannah travels to upstate New York with Jessa, where they visit Jessa’s estranged father, quirky step-mother and awkward younger step-brother. Jessa’s disappointed by her dad when once again, he shows that he is unable to play the role of father to her. Hannah gets drunk and has extremely disappointing sex with Jessa’s step-brother. Jessa is overwhelmed by the visit with her dad and takes off, abandoning Hannah, who must make the train trip back to the city, alone.

Episode 8 – “It’s Back” – The fast approaching deadline of Hannah’s e-book, coupled with a visit from her parents, bring symptoms of obsessive compulsive disorder to the surface. As she tries to hide her ever-growing anxiety, she finds herself repeating behaviors, eight times each, similar to the OCD symptoms that  she suffered from in high school. Marnie gets the news that Charlie has developed an app that has made him very successful, thus inspiring her to follow her dream of becoming a singer. Shoshanna questions her feelings for Ray and has an affair with a doorman. Adam meets a woman at an AA meeting, who suggests he date her daughter, Natalia.

Episode 9 – “On All Fours” – Pressure from her publisher over the deadline of her e-book causes Hannah’s anxiety and OCD to take over. She becomes so agitated that she sticks a Q-tip into her ear, landing her in the hospital without any pants on. Marnie and Charlie have sex and Ray and Shoshanna come together again. Adam dates Natalia and things are going well, until he falls off the wagon at a party. A chance meeting with Hannah further    disturbs him, and the night ends with Adam pushing Natalia into sex that makes her extremely upset and uncomfortable.  Read our article examining this episode here.

Episode 10 – “Together” – Ray and Shoshanna can’t seem to get their problems sorted out, so Ray decides to make a big career move, in hopes that he can change her opinion of him. Marnie and Charlie have trouble communicating, while Hannah attempts to write her entire e-book in one day, in order to avoid a lawsuit. Hannah then leaves an emotional message for Jessa, before contacting Adam. Recognizing that Hannah is in the middle of a breakdown, Adam rushes to her aid. 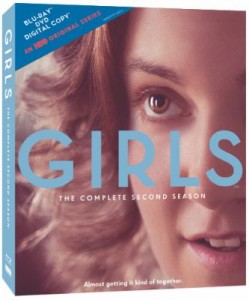 Episode 5 Table Read – Lena Dunham, Patrick Wilson and Alex Karpovsky read through the Episode “One Man’s Trash.” This was much more interesting than I’d expected, as even without the sets and props, the actors were able to to draw you in and captivate you. Well worth a watch!

Inside the Episodes – Take a look at Episodes 1 – 5 with the ever brilliant and captivating Lena Dunham, as she gives a short synopsis and her own perspective on the first half of the season. This is well done, short enough to keep your interest, long enough to give you a good feel for each episode and character.

Audio Commentaries – On this disc, we get to listen to Allison Williams (Marnie) and Andrew Rannells (Elijah) chat over Episode 1, which is thoroughly entertaining! This was such fun that I was sorry when the episode ended. Other commentary comes from Director, Jesse Peretz, who offers a fascinating look at Episode 3.

Guys on Girls – Lena Dunham leads a round-table question and answer session with Adam Driver (Adam), Alex Karpovsky (Ray), Andrew Rannells (Elijah) and Christopher Abbott (Charlie). This was my favorite Bonus Feature, as it was really interesting to hear the guys talk about their own insights into their characters and their relationships.

Inside the Episodes – Revisit Episodes 6 – 10 with Lena Dunham as she shares her thoughts and some background information on  the second half of Season 2. Again, this is well done. Lena is charming, entertaining and informative. I was disappointed when it ended.

Audio Commentaries – This disc brings us some interesting commentary on Episode 7 by Director, Richard Shepard and an in-depth look at  Episode 9 from Creator/Executive Producer, Lena Dunham (Hannah) and Executive Producer, Jenni Konner. The episode 9 commentary definitely gives viewers a better understanding of what was, for some, an uncomfortable episode. 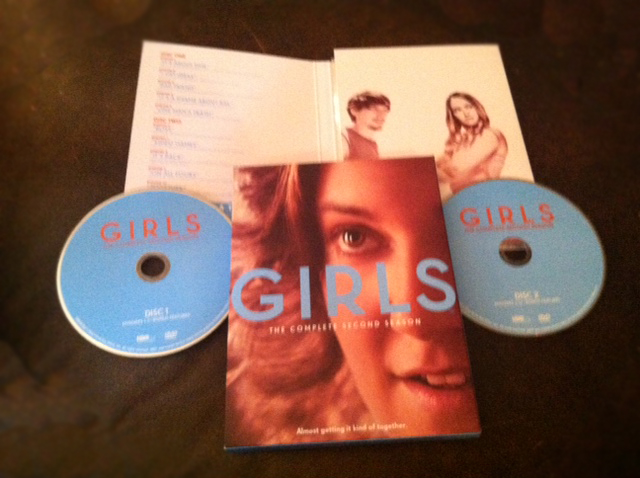 Go order your copy of [amazon_link id=”B00BGI06YA” target=”_blank” container=”” container_class=”” ]Girls: The Complete Second Season[/amazon_link]! It’s well worth the purchase for the Bonus Features, alone. I spent a few days watching them all and had a blast. The commentaries had me laughing, the table read had me in tears and the deleted scenes and gag reel were hilarious. Don’t miss this one! If you still want more Girls, check out our Season 2 breakdown by character, here.

MJ Snow is a Canine and avian behavior specialist, role player, blogger and writer.  A long time George RR Martin fangirl and Game of Thrones Addict, MJ spends way too much time in Westeros. MJ is the founder of The Snow Keep, a short story and fan-ficiton blog and The Brothers Clegane, a Sandor & Gregor Clegane tribute blog, she also co-curates several other Game of Thrones themed blogs.