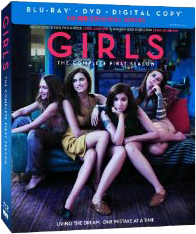 Super-fans of HBO’s new comedy Girls have more than likely been watching episode of Girls on repeat on HBOGo for the past 6 months now. Soaking in every detail of Lena Dunham’s vivid, realistic depiction of young life in Brooklyn, New York. But for the rest of us waiting for the DVD and/or Blu-Ray release I’ve got some good news for you: you’ll be able to relive your favorite moments along with a ton of extra features on December 11th, just in time for the Holidays.

Here are the list of special features included in the 3-disc set:

-A Conversation with the Girls
-A Conversation with Lena Dunham and Judd Apatow
-The Making of Girls
-Deleted and extended scenes
-Gag Reel: Parts 1&2
-Cast auditions
-Table reads
-Inside the episodes
-5 Audio commentaries with cast and crew including an exclusive extended commentary on episode 6 with Lena Dunham and Judd Apatow
-Fresh Air intervie

It’s tough to tell how in depth each of these pieces might be but judging by other HBO digital releases we can expect some high quality never-before-seen Girls content on these discs. Pre-order your copy now [amazon_link id=”B008CFZS1G” target=”_blank” container=”” container_class=”” ]on Amazon for only 30 clams[/amazon_link] for the Blu-Ray and a mere 23 for [amazon_link id=”B008CFZQQS” target=”_blank” container=”” container_class=”” ]the DVD set[/amazon_link]. A great stocking-stuffer for that 20-something New York girl with a quirky web-presence.