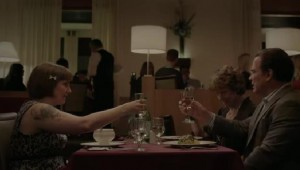 The Girls are back! And the Season 4 premiere begins with a strikingly familiar establishing shot of Hannah and her parents at dinner, alike to that of the Season 1 Premiere. Hannah may have gotten into graduate school, but certainly not much has changed, with her irritating mother telling her that she “doesn’t need” an extra order of French fries. Right when Hannah seems to be addressing the financial tension that she has had with her parents (in the same restaurant that Hannah received the news that she would be cut off financially) Adam comes storming in late, with a toast to Hannah’s strange and unpredictable future- “All we have is days marching on.” This scene, paired with Hannah’s watching of Adam’s new commercial, is a brilliant shift of tones. Lena Dunham dramatically transitions us from the bright and romantic notion of “looking to the future” back to the day-to-day struggle that Adam and Hannah, like all of us, have to deal with.

The conflict between Adam and Hannah over their respective work life seems to be as present as ever, yet it certainly appears that Marnie and Desi have made progress in their relationship… But, in perfect Girls fashion, Marnie is of course actually just a side-fling for Desi, which is made clear to us when we are reintroduced to Desi’s overly-attached girlfriend. 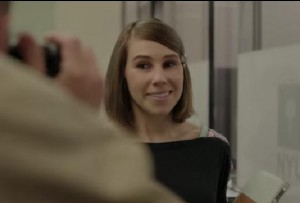 The premiere also provided us with a moment we all have been waiting for, when we are introduced to Shoshanna’s clumsy father, and her nagging mother, who still insists on calling her by a childish nickname. Shoshanna seems just as fragile as ever, and I actually found myself feeling for her, but at least there is some glimpse of hope- as we discover that she finally graduated. When Shoshanna greets Ray, with this uplifting news at the Jazz Brunch, she promptly stumbles back into her unconventional tendency to awkwardly stutter and ramble on, that as viewers we have grown to know and love. One thing that the premiere made clear to me was that Shoshanna’s new status as a college graduate has had little impact on her suffering self-confidence.

While it has been almost a year since we have been with these characters, it certainly feels as though the plot is just as interconnected as before. And that is certainly an aspect of the premiere that I adored-all the characters had moments that wrung so true to the people we have been acquainted with over the last 3 seasons.

Upon entering Beedie’s apartment, after last season’s climactic catastrophe, Jessa is met with a harsh confrontation from 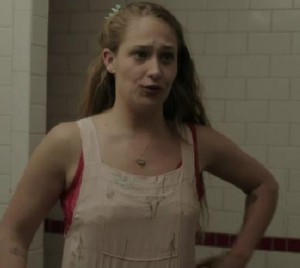 Beedie’s daughter (played by Natasha Lyonne from Orange is The New Black), which is certainly an entertaining and well-written argument. But what I find especially unique and satisfying about this scene is that we actually get to see Jessa show honest and heartfelt caring for someone else. Even in the short stint with her husband we never saw Jessa beg for someone to stay, and actually show attachment to anyone, which certainly is refreshing aspect of this episode. Dunham conveys great depth of character in Jessa, as her pining for Beedie to stay highlights that underneath her gloomy and dark self she actually is capable of caring and loving.

Marnie and Desi got a gig singing at a jazz brunch and this is where the underlying conflict certainly seems to begin to surface. I loved that we got to see all our favorite characters interact together in the same environment, I mean, even Marnie’s mom made an appearance! After Marnie awkwardly patches things up with Desi’s girlfriend and cracks some awkward jokes the two begin singing together and sparks begin to fly. Hannah tells Jessa that she has been a little “mean,” as Jessa furiously questions Hannah’s leaving and her hypocritical nature. This is a moment that certainly defines what I love about Jessa: she is never afraid to say what everyone is thinking. But at the same time, we once again get to see a more vulnerable side of Jessa, even though she would never admit it directly, Jessa actually is scared that she is going to miss having Hannah around. Elijah is back, dressed as jazzily as ever, and even he is forced to confront the past, as he runs into his ex-boyfriend that we met at the beach house last season.

I loved the fact that the Adam and Hannah both could not help but think that the song that Marnie was performing related to their relationship, with Hannah’s flight to Iowa departing the next day. Lena Dunham brilliantly conveyed the tension between the two through the portrait-style shot of them both blankly watching the performance, clearly with other things on their minds. 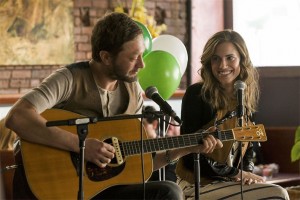 Just when you thought things couldn’t get worse at this Jazz Brunch, chaos breaks out at the restaurant as not everyone, specifically little toddlers, seem to be pleased with Marnie’s performance. I found this scene especially introspective into Marnie’s character, as we see that her facade of happiness and togetherness is deeply compromised by her own insecurities. And who else, but Elijah, is there to comfort Marnie in his odd yet harsh and honest ways, when she storms off into the streets crying.

I found it a little misfitting that even on the last night before Hannah’s departure, Hannah and Adam refuse to actually delve deep into the problems and insecurities that they have about one another. Maybe Jessa was onto something with her advice to Hannah back at the Jazz Brunch, about how Hannah is shying away from the reality of her relationship with Adam.  Adam and Hannah proceed to awkwardly make love and the hopeless and uncomfortable look on Hannah’s face seems to foreshadow the trouble to come. Cue the sad-departing music, as Adam gloomily stares off into the distance as Hannah gets in her parents car to go to the airport- yet to me it certainly seemed that this goodbye was not as ceremonious as it should have been. It was a nice touch that Marnie was there, Starbucks in hand, at 6 AM to help Hannah pack her bags. It seems as though Hannah and Marnie are in a much better place in terms of their friendship in comparison to the beginning of last season. 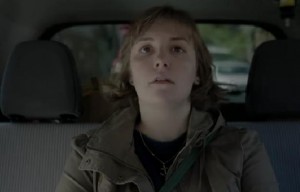 Overall, I thought this episode had great symmetry in terms of character development, as all the respective characters were forced to deal with how decisions they made in the past are now going to have an impact on their future. Additionally, the episode certainly sets the stage for the season. With Hannah leaving for Iowa, Girls will for the first time be focusing on a plot line that is outside of New York, which certainly will lend itself to some adventurous plot lines, as well as the predictable storm that has been hovering over Adam and Hannah since Hannah’s acceptance letter. We are also left with the question of, will Hannah’s excursion to Iowa actually be a positive one, or will it leave her in the same malingering state that has been so present since her arrival in New York.

And here is a look inside the episode with creator, Lena Dunham.

Here is a look at what’s to come on next Sunday’s episode entitled “Triggering.”