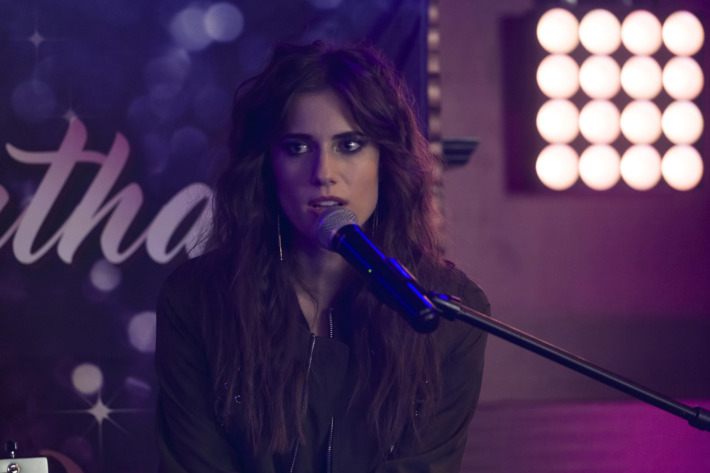 The episode starts off with Marnie and Hannah preparing a dinner because Hannah has news. Marnie is aware that this is the purpose of the meal but wastes no time talking about herself. Ray broke up with her. For whatever reason, this news could not wait until later. It’s because of reasons like this that it’s really difficult to care about Marnie. She’s always thinking about herself.

Hannah shares with her the fact that she’s pregnant to an unexpected response of support. It doesn’t last long until the question comes up about whether or not Hannah should tell the father. This is one of the reasons I like Girls: it can be weird, it can be funny, and it can also bring up real issues. Hannah’s stance on her initial decision seems like she’s avoiding the real reason she doesn’t want to tell the father. She made it sound like it was almost sexist to let him know. The theme of whether to tell the father of your child that he’s going to be the father despite no interest in being with him.

Marnie and Desi argue again. This time it’s because Desi is so unmotivated about working as a musician and he feels worn out mentality by the thought of it. I have to admit tha 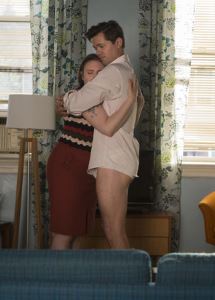 t I do feel for Marnie in her situation, but her expression comes off as overbearing. It’s difficult to tell what is more frustrating to witness, his behavior or hers. The situation is not ideal, to begin with: trying to fulfill a career with your ex.

Elijah tries to extend an olive branch to Hannah after saying how she would make a horrible mother last episode. After the taco dog olive branch failed, he apologizes and explains. Elijah is great in any scene he appears in this episode. This one is no exception. While Hannah’s scenes can good or bad, with Elijah in the picture, the scene is likely to be on the more positive end of the spectrum. The chemistry and the dynamic between these two are entertaining to watch. With a baby on the way, it was interesting to see how they quickly they seem to assume the parental roles almost reminiscent of Hannah’s parents. The difference is that Hannah’s dad wasn’t openly gay until she was already grown up.

Adam tries to convince Hannah to watch the movie that he made with Jessa. It was strange how it went from him seeking Hannah’s approval to almost offering it as proof of his love for her. This seems to be the case as he seems distraught that she’s pregnant. What’s with HBO shows lately and mentioning The Wire? Last week it was Crashing and this week Girls has a character to claim that she hasn’t watched The Wire? We get it, HBO, you want people to buy The Wire on Blu-ray.

Desi arrives at his gig high. From the moment he takes off his helmet, it’s obvious. Marnie’s mother says it best: “Marnie, you should really know what a high person looks like by now”. You think she would at least look out for this sort of thing or suspect it with his history of drug abuse. Somehow she blames all of her problems on her parents. She was with some other guy at the start of the series that she was thinking of breaking up with. She wasn’t feeling pressured to marry him. Why is she so difficult to empathize with?

Hannah’s dilemma sparks a debate between her dad and his boyfriend. The debate is more centralized around whether the father has a right or want to know. I personally think he would need to know in case the child asks about his or her father later on in life. The big question is what will the father do with this knowledge and will it line up with the mother’s plans. The way the 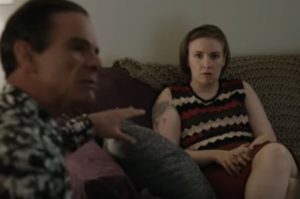 episode handles this subject is one of its strengths as there’s no clear right or wrong answer and the opposite sides of the debate are represented each time it comes up.

Back at the gig, Marnie seems to treat her musical career as a burden because it’s her livelihood while a more experienced woman says how it was the time of her life. How’d someone her age become so uptight? I guess uptight is the wrong word for it. It’s clear that she’s trying so hard to make a dream come true that it cuts deep like the double-edged sword it became. This is finally where I feel some empathy for my least favorite character. She’s tried very hard to get to this point and finds that things are falling apart. She needs to be in control but has no control. She thought Desi help elevate her career and now he’s holding her back.

Elijah helps a co-worker practice for an audition. I’m not sure if this scene will have any relevance to anything later in the series. It’d be nice to see Elijah actually succeed somewhat with an acting career. Even if this ends up being a one-off scene, it was interesting to see him act, dropping the gay lisp and adopting a different accent on the spot. It was like watching a completely different person.

Jessa visits Hannah and gets straight to the point in a way that feels so much like her. This scene felt like the first real time that Hannah have actually spoken since the “betrayal” of last season. Jessa is a tragic mess. I don’t think there’s a nicer way to put it. There’s still a very human part of her that it seems like the news of Hannah’s pregnancy prompte 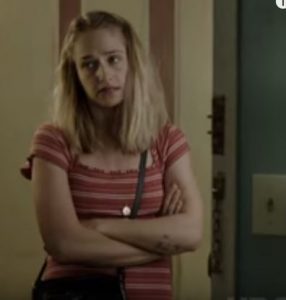 d Jessa to try to make amends with her former friend. Sometimes it takes a major life-changing event like a pregnancy, marriage, or a death to put other things in perspective: maybe some things matter much more. Hannah shuts her down. I can’t say I blame her. Jessa is her own worst enemy, but in a way that you can’t help feeling that it happens despite her best efforts. It’s in her nature.

Desi wanders aimlessly while Marnie performs with her mother. I couldn’t help wondering if this is the kind of direction that Marnie needs to take with her career. Desi has clearly checked out and as much as he needs help, I doubt Marnie has it in her to be the one to do that. If she somehow does, she’ll probably blame how miserable her life is because of it. She needs to either go out on her own or get a new partner… probably not her mother, though, because she clearly did not like the scatting.

Close to the end of the episode, Hannah decides to try to call the father of her child but is unable to reach him. We won’t find out until later what his reaction will be. She then decides to do the other things that she refused to do earlier in the episode: watch Adam’s movie. Much like the title of the episode, which could be referring to Hannah speaking about her plans for the pregnancy, the movie’s title is “Full Disclosure”. Though, it’s spelled “Full Dis:closure”. I’m not sure why it’s spelled like this or if there’s some deep meaning. Please let me know if you know why. 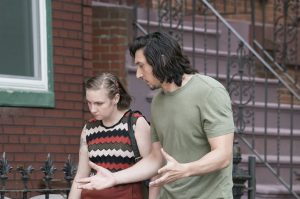 e best lines are in the final minutes of this episode. The first is after the title screen of the movie during the loud sex scene that immediately plays. Hannah says “Great. It’s porno”, which is commonly a Girls non- fan’s first impression of the show. I’m not kidding about this. I had a family member say that exact phrase when they saw I was watching this show. The episode concludes has Adam and Hannah seemingly look into each other’s eyes across an empty pillow. My thoughts on this? Please, don’t let these two get back together. Please. Please. Please. It was one of the most twisted relationships that had me saying to someone “you can do better than this”.

In a rare occurrence, we are treated with a closing credits scene from the movie where Hannah and Adam meet. It’s sweet in its own weird way that only Adam could pull off. The other best line I mentioned comes here: “If it hurts, you’ll always remember”. These words are both very deep and very true. The things that have the biggest impact on your life are the things that leave behind memories. Not just the moments we treasure, but the painful ones as well.

With the final season of Girls picking up momentum, this episode is an example of one of the reasons I will miss this show long after the final episode airs, but it’s not over yet. Here’s a sneak peek of the next episode of Girls.

What do you think? Will this season be the send-off the show deserves?