Last week, Hannah shared her news with Marnie, whose life seems to finally be imploding around her. But while Hannah is determined not to tell the father of her baby, everyone else has some strong opinions about that very idea.  Meanwhile, Elijah’s love for acting is rekindled and how that fire burns!

Since Girls is coming to a close, it was finally time for an Elijah-centric episode. We got to celebrate him in all his sarcastic and wondrously adorable glory. But we also get to see some other characters have some revelations.

After the opinions last week about Hannah telling the father Paul-Louis about the baby, she finally decides that he deserves to know. Before, she was staunch on the idea that he had no business knowing. That she is the mother and she knows that Paul-Louis has a certain lifestyle that is likely not one to include a kid. But everyone, including the reappearing Dill, thinks the father should know. So she makes a call and leaves a message and waits for a return call. Unfortunately, the response isn’t quite what she wanted. Or wa 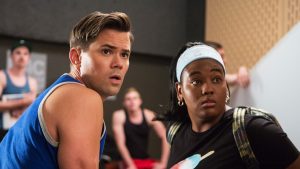 Elijah is getting back into his acting, and he hits a rocky step. His confidence, which is usually not a problem, is actually taking quite a hit.  While there, however, he meets a dazzling chickadee named Athena Dante who reminds him exactly what kind of power he truly has, whether Dill comes back into his life for good or not. Spunky Elijah is my favorite Elijah. Because while it often comes across as cocky or self-serving deep down Elijah actually has a soft, gooey center.

Marnie, on the other hand, believes that everything that has happened in her life is because of other people. Because her husband is a drug addict. Because her mother always chose men over her. Because her father was a liar. Until someone finally spills some great wisdom and takes her down a notch more than any person ever could. This season has shown some growth for all the characters, and I was wondering when it would be Marnie’s turn to accept responsibility for her life and her choices. In the beginning, I always figured I shared some personality traits with Marnie but as the seasons went on I really didn’t like the fact that she wouldn’t grow up. But maybe by the end of the series, we’ll see some actual personal growth.

And speaking of growth, it looks like the next episode might feature some for Jessa and Adam. It sounds like Adam needs to figure out some things, and it’s possible that his life with Jessa might be coming to a close. Or maybe not?  Maybe he just needs to clear the air with Hannah?  What are you all thinking? Who will Adam end up with: Jessa or Hannah?