Until this season, we had come to know Gillian Darmody as a scrappy, calculating, power-hungry woman, one who’s always entertaining and who loves her son dearly—maybe too much, as, at the end of last season, we witness the two of them have sex.

After Jimmy was murdered, Gillian went off the deep end.  She denies he died at all. She takes a stroll on the boardwalk and approaches a stranger—a Jimmy doppelganger, with the same hair and complexion—and they have sex.  Then, during pillow talk, she asks to call him James—he was a king, she explains.  Their sexual dalliances continue.  She strokes him like a child, and, as she gives this man-child a bath, she murders him.  Gillian’s insane, no doubt about it.

That said, I’m not in a rush to condemn her, as some other writers have since Episode 7 aired last week.  Despite her multiple transgressions, which, on top of murder, include the pseudo-realization of an incest fantasy, I want to understand Gillian, not quarantine her.  I’m more curious about her motives.

The answer, for me, resides in her relationships with men more generally.  And one incident in particular illustrates that relationship, when Gillian and her new lover dine alone on Easter Sunday.

The undercurrent of this scene turns from sexual to downright sinister. After a few bites, this Jimmy lookalike proposes that he and Gillian, who he’s just met, sell her mansion and use the money to travel around the world together. Taken aback—although her cool composure doesn’t show it—Gillian asks if he intends to swindle her. 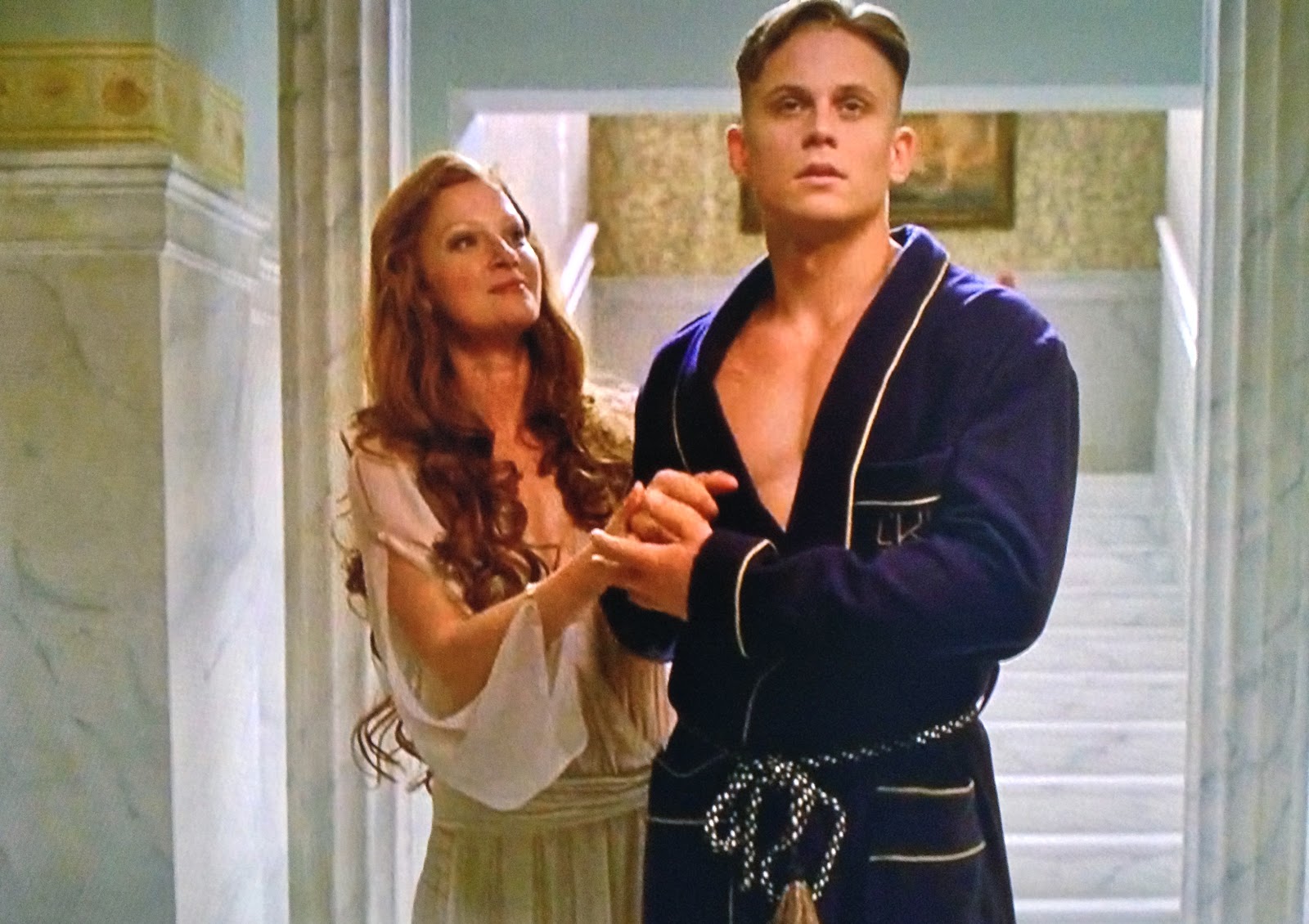 Instead of answer, he gets up from the table, approaches Gillian, and asks her to pull up her dress.  Gillian asks if she has any say in the matter.  He says, “Spread your legs.”  She does. What began as rape becomes consensual sex.

In front of this hulking, muscle-bound man, Gillian doesn’t have much of a choice either.  Her words don’t have much say—she learned that lesson with the Commodore years ago.  Her only way to wrest control is to cede it, and with grace.  Gillian’s way of dictating her life’s course is to see the terms men set and dictate them herself.  It’s how she owns the men who treat her like shit.

Jimmy, though, is the one who got away.  His life was her project last season.  Then he left her—he marched out of the door to his death and she was left alone.

Gillian’s treatment of this Jimmy lookalike is beginning to look clearer.  He’s like a conduit, one she can use to repair the damage Jimmy’s done to her.  On some level, Gillian knows her son is gone.  But to project him onto this man, and ultimately kill him herself is to do as she did she during the Easter-dinner sex scene—it’s to see the inevitable and take control of it.

So, rather than condemn Gillian, I feel sorry for her.  She has an insatiable will for power in an inhospitable society, dominated by men; and that hunger for power is even further bound up with her love for Jimmy.  As a character, too—as a writer’s construction, and as a tool to motivate the plot—she’s at Jimmy’s mercy.  Before he died, Jimmy was the center of the show; other characters orbited around him.  And now that he’s gone, some have fallen away, and some crashed hard—Gillian especially.