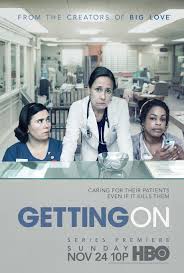 Believe it or not out of all the contributions this writer makes for HBOWatch I have never done an episode review. I was going to save that effort for the debut of TRUE DETECTIVE in 2014, but when it looked like no one was coming forth to review the premiere of GETTING ON which aired 11.24 I decided to give it a go.  Note: this is not a recap; it is a review. So let me get on with it.

Episode # 1 – Born on the Fourth of July

The series takes place in the Billy Barnes Extended Care Unit of Mt. Palms Hospital in Long Beach, California. It is July 4th and a staff has pulled duty to care for the residents of the ward. One patient is celebrating her 87th birthday and it proves to be her last one; another one was brought in from wandering along a highway gibbering and screaming in a foreign tongue and, there is the lady who needs her ass wiped for her after each bowel movement. So, where is the comedy you ask? Oh, it is there in its wordplay and slightly absurd situations. Most of it occurs around the staff.

First is the loyal caregiv 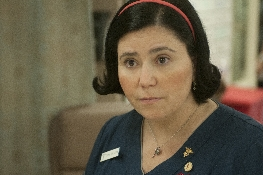 er on the floor. She is Dawn Forchette played by Alex Borstein. She is most noted for voicing Lois Griffin on Family Guy (THEY KILLED BRIAN! – sorry). There is the new nurse on staff, Denise Ortley, played by Niecy Nash (Reno 911) whose first day is July 4th. How cruel is that?  Also working is Dr. Jenna James (Roseanne) who is assisting in that ward over the holiday. Their biggest concern of the day doesn’t really seem to be the residents of the ward but the unclaimed feces discovered on a chair. There is your absurd comedic situation. How they debate and decide what to do with that doodoo is where the witty wordplay comes in. 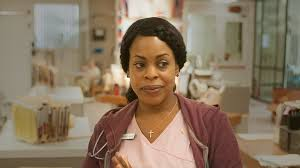 hat is the U. S. health care system. There is lack of funds and lack of help but tons of red tape and personal advancement prized over assisting the ill.  In fact, in episode one, we already witness a meltdown. Dr. James, obsessing over the laid turd and her aggressive determination to free up a bed as quickly as possible for her preferred patient sends her into a frantic state. The results are not too pleasant for all. The unit is hectic enough for Dawn and Denise. Denise gets caught in the middle of bickering when she was only trying to make a good impression on her first day and Dawn tries to do right as well as we discover how compassionate she really is. But, despite all that stress, some moments of compassion and care do shine through. The show walks that fine line between commenting on the issues and finding humor in them as well.

If dark comedy is your thing this is your show. A lot of time will not be invested in it because it is only a six episode season 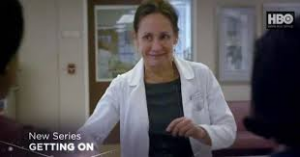 but in that time it will bravely find humor in the situations that can surround hospital care, old age and dying. We may not get to know much about the infirmed here but the staff will surely take us on a roller coaster ride of emotions. In one twist of fate after she bucks the resident head, played by Thelma Hopkins, Dr. James learns that the geriatric unit is going to be her permanent assignment. That should keep the comedic thread going. She’ll “get on” with it, they all will, as they strive to make a difference one stool sample at a time.

Maybe, you care to join us at HBOWatch as we check into Billy Barnes Unit ourselves and try to find the humor in it all. It is not too late to catch the premiere as it runs a few more times this week and can be found on HBOGo. We leave it at that with a  sneak peek at Episode Two.