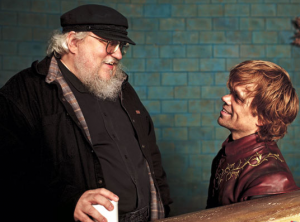 Entertainment Magazine has named George R.R. Martin, the mastermind behind source marterial for HBO’s Game of Thrones, one of it’s Entertainers of the Year for 2011.

Here’s what they had to say about The American Tolkien:

“George R.R. Martin is such a great writer that it makes ­people angry. Fans can’t read his books fast enough, and even I find myself cursing the fact that I am already halfway through the ­4,000-plus pages of the epic fantasy series A Song of Ice and Fire. Mr. Martin is the best kind of fiction writer. He cares about what happens to his characters as much as we do. He writes about major themes in human ways and he isn’t afraid to go big. The scope and size of the world of Westeros is like ­nothing I have ever read, let alone dared to imagine. From Winterfell to the Wall, each ­location is strange and staggering and still feels familiar.

Martin’s books are filled with heroes looking for honor and ­villains searching for a sense of home. Leaders who worship ­different gods and mothers who worry about their children. He reminds us that the king and the beggar are afraid of the same thing. Just because you are a knight doesn’t mean you can’t have daddy issues.

Martin has characters to spare, with great names like Qhorin Halfhand and Daenerys Targaryen and Theon Greyjoy. And here is the cool part: Some of them die. Martin kills off ­characters in ways that make you gasp. When you read his books, you smell the horses and feel the cold and taste the wine and the whole time you know that someone will die! Trust me, it’s exciting. And let’s not forget the women…Sansa, Arya, ­Brienne, Cersei, Catelyn. If only the world were run by these women. All of them with various amounts of power, all suffering, all wiser than they are allowed to be. But just in case you think it’s all doom and gloom, I’d like to point out that Martin is funny. Tyrion the Imp has some of the best one-liners I have ever read from someone about to die. Did I mention a lot of people die? Never mind, I shall read on and enjoy the series while I can. Because if there is one thing George R.R. Martin teaches us, it’s that nothing lasts forever. And winter is coming.”

Congratulations, George!  You’re finally getting the recognition you’ve always deserved.  Now get back to work on book six post-haste!

2012 looks to be a good year for George as well with Game of Thrones season 2 premiering in April.