I suppose you would have to consider it a compliment to be amongst Torrent-Freak’s Most Pirated Shows of 2011.  Two HBO programs stole the #2 and #8 spots on this year’s list which is compiled each year by the torrent news site.  Game of Thrones came in just behind ShoTime’s Dexter with 3.4 million downloads while True Blood took 9th place with 1.9 million downloads.

Overall, the pirating of television programs via Torrent networks has gone down due in large part to companies such as HBO allowing their content to be distributed online legally ala HBO Go and other outlets.  Some piraters are motivated by a lack of availability in their country of residence while others simply can’t wait for a proper release on DVD or Blu-Ray.  Either way viewers just can’t do without their HBO.  Here’s the entire list: 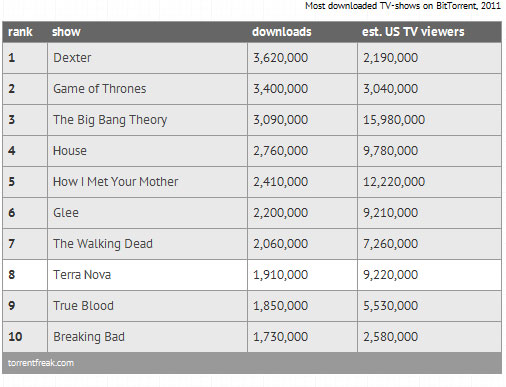 Have you ever downloaded an HBO show?  What were your reasons?  Is it easier to get HBO content these days or are you still forced to pirate your shows?  Do you try to Download Game of Thrones Torrents?  Tell us how you download HBO Shows like Game of Thrones.   Leave a comment below… We promise we won’t rat you out!