Watching Game of Thrones grow in size and popularity over the years, it has been interesting to note how the marketing of the show has slowly become more and more about dragons and White Walkers.  Take a look at the sprawling posters that dominate prime spots in your city when the newest season is about to air, and you’ll see the icy stare of the Night King or the drooling jaws of Drogon. It’s a far cry from earlier years of advertising which focused more heavily on character portraits, and I think it’s a good demonstration of the changing attitudes most people have of what they want from the show. When Jon Snow petted the enormous muzzle of Daenerys Targaryen’s dragon, last season, two elements of Game of Thrones, which have circled each other, first carefully, and then with increasing abandon, for years, came together—spectacle and more grounded character development. Originally, the show was about characters first and foremost, with the fantastical elements (wights, White Walkers, wargs, warlocks, dragons, and direwolves) lurking on the outer edges of the story, accessorizing the character development, if anything. Game of Thrones used to be a story about people and their very human problems, albeit set in a fantasy world, but it doesn’t feel that way anymore.

While there is something undeniably alien about Westeros for most of us, with its looming castles and societal penchant for bloodshed, audiences found Game of Thrones compelling because characters like Tyrion Lannister, Jon Snow, and Daenerys Targaryen were accessible and relatable in that  it was easy to feel that their sorrows and victories were ours, even if we have never shouted “Dracarys,” or played at diplomacy with a fur clad wildling.  Like Jon, many of us have struggled to find our place in the world, and coped with rejection of one kind or another. Like Daenerys, many of us have fought for what we believe in. Like Tyrion, many of us have failed at something that was important to us, and lost things we held dear.  Game of Thrones used to offer us a fantasy world where we saw ourselves, in all our messy human glory– a rare thing in a genre which leans towards extremes and archetypes. Over time, that realism was lost, and with it, the greater promise of thematic substance. 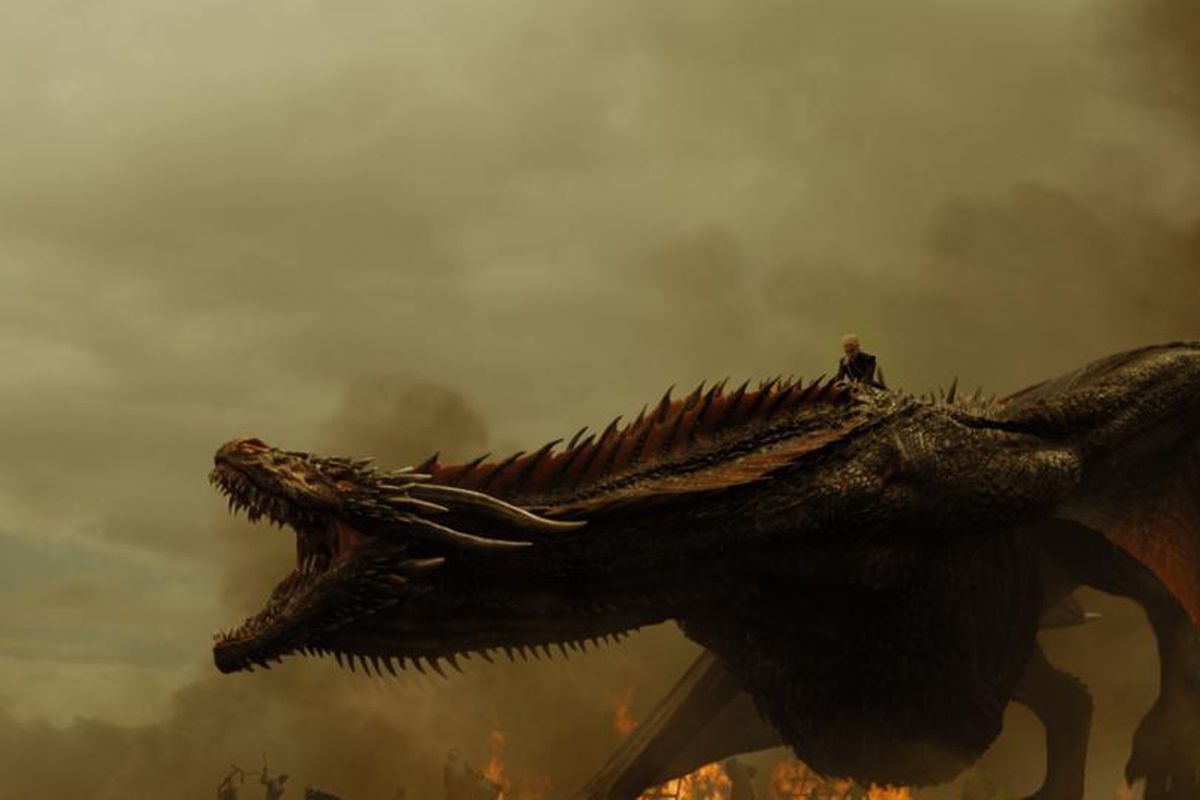 For me, at least, the fantasy elements, while enormously fun and exciting, weren’t why I was originally drawn to Game of Thrones. I was there to see the characters change and grow, not the dragons. As winter arrived, and the presence of magic became more pervasive in the world of the show, the lines between stories of humanity and fantasy have become incurably obscured and wound together. It’s a natural progression of the story, perhaps (after all, the very first scenes of the show feature White Walkers and direwolf pups), but I can’t help but feel something of the allure of the earlier seasons has dissipated. There were many shots of the dragons wheeling in the sky in Season Seven, but very little insight into what some of the characters who had been only recently exposed to these strange, fantastical beasts thought of them—how the knowledge of their existence shaped their view of the world, or affected their priorities. I found myself longing for that more than another shot of scaly reptiles soaring through the clouds.

As much as I find little use for the overemphasized fantastical elements of the show, some people (most likely a resounding majority) have equally come to find little patience for the truly human remnants of the story. Fans clamour for dragons, and dragon-fire, carnage, and blood, preferably the frozen, White Walker kind. They had ecstatic conniptions when the Wall fell– a  block-buster worthy pageant involving a great deal of blue CGI fire and sneering zombies, and now they want to see Jon Snow, now a near ideal approximation of righteousness and justice, slash down the Night King in yet another wild, chaotic battle, which will no doubt have more blue CGI fire and sneering zombies, before restoring Westeros to  some semblance of peace and goodness, as he rules by the side of his unimaginably beautiful Targaryen queen. There’s no room for characters who can’t or won’t engage in these outlandish, overstimulating antics, because exaggerated displays of Lord of the Rings style conflict have become what fans have come to expect and celebrate. Tyrion Lannister, once a leading character of the show, has been swept to the side because there is little room for a dwarf, no matter how clever or quick-witted, in an apocalyptic video-game style battle of clashing good and evil. Jaime Lannister, who peaked in Season Three with a truly beautiful character arc of pain and self-acceptance, stagnated for the next four seasons or so, in favor of more colorful arcs, the dazzling CGI kind.

The character who perhaps suffered the most, at the hands of frustrated fans who just wanted their sugar rush of dragons and  flashy sword fights with frigid foes, was Theon Greyjoy, whose arc is most definitely one which is purely human and not at all flavored by wings or wraiths. In a story which was supposed to revolve around Theon, Ramsay Bolton quickly took over and became the focal point of that arc, because in his inhuman monstrosity, he was the closest approximation to fantasy the writers of the show could get to, and that was what the viewers of the show wanted. Theon’s story and his character, which is robust and as deeply complex as it is poignant in the books upon which the show is based, became an oversimplified afterthought at best and a set piece at worst. When he emerged back into the larger world after a few years of terrifyingly human adversity, he was out of place and unwanted—not only in Westeros, but in the greater plot, a lasting, and undesirable artifact of when Game of Thrones was about people, first and foremost, and ice demons and dragons, second.

Audiences were vocally and unapologetically angry when Theon didn’t hew down his  uncle on a burning boat, in the latest season of the show, not because they particularly cared that his sister Yara, was in danger,  or because they wanted Euron dead, but because they felt they had been deprived of the simplistic, cartoonish conflict  and resolution between right and wrong they had come to expect. The stage for run of the mill heroism was set to an almost generic degree and audiences felt cheated that unlike Yara, who took  on the part of the damsel in distress, and Euron who eagerly stepped into the shoes of the pantomime villain, Theon would not play the role they wanted– the role they had seen a hundred times, yet still wanted to see again. It’s easy to see why the writers of the show feel increasingly pressured to follow more traditional lines of storytelling. The old legends of heroes fighting faceless evil have been universal staples of our stories and our play since our childhoods. Game of Thrones was special, at least to me, because its protagonists used to be complicated, flawed human beings and the evil they sought first and foremost to conquer was often a personal aspect of themselves or their societies, or at least not a one-dimensional source of malevolence. The general public and in turn the writers of the show seem to have rejected this line of storytelling because, in the end, even as they said they liked the passionate pessimism of Game of Thrones, and its twisted, complicated protagonists, at the end of the day they wanted hope and heroes, plain and simple.

Of course there is nothing wrong with wanting to find hope in our entertainment. I am certainly not one for unfailingly bleak stories. What audiences failed to realize is that Game of Thrones was always about hope and heroes, just in a more nuanced way. You used to have to dig deep for it, just as you do in real life. Now it is easy to find. Indeed, the most popular characters of the show, the ones you will find plastered on merchandise and lauded by social media are Jon Snow, a resurrected god with the blood of two noble and popular houses in his veins, and Daenerys Targaryen, a warrior woman  and opulent queen with shining white hair who rides her dragons into battle against her foes. Few are willing to accept characters whose accomplishments and morality are not black and white and easily categorized. They certainly don’t want them on their calendars, t-shirts, or Facebook feeds. And why should they?  We don’t want to see ourselves, or our struggles, when we seek escapism, after-all. When given the choice, we would all be Jon Snow.

One doesn’t have to condemn Game of Thrones‘ descent into a generic lack of realism– it’s palatable and unproblematic, and I liked seeing Jon Snow punch Ramsay Bolton and take on a hoard of wights just as much anyone else– but we can mourn the death of a promise of something more– an insight into ourselves. Watching Jon kill monsters, of the mortal and immortal variety, is good fun, but his blind heroism and selflessness feel just as alien in some ways as the White Walkers he is slaying. To the exaggerated extent that he displays them, Jon’s qualities are as rare and fantastical as his Targaryen bloodline. In his idealization, and simplification into a grand and inaccessible hero, Jon has ceased to be a compelling or relatable character beyond the constraints of stilted mythology. His character is a wonderful fantasy to indulge in, along the lines of dragons and knights, but it has very little applicability to the real world we live in, a world that is already over-saturated in fictional heroes whose qualities are, for most of us, more or less unattainable. Game of Thrones began by giving us people who, for all their flaws and failures, were admirable in a very real way, but it has felt harder and harder to find the reality in these same characters, even as they become more and more admirable in later seasons.

Game of Thrones isn’t necessarily currently a bad show, but it is a different show than the one I first began watching eight years ago. A great deal of its popularity is that the show has always offered something for everyone, but over the years, I do feel that the balance between grounded character development and fantasy histrionics has tilted farther and farther in the favor of the latter. The show is still fun, but it’s not as fulfilling.