If you’re anything like me, you’re becoming rather obsessed with Game of Thrones right about now. The second season is in its final half and the suspense is building quickly. Honestly, I can’t get enough of this show and all of the incredible characters in it, especially the females. A Game of Thrones’ unique portrayal of women leaves no means of feminine power unexplored. There are mothers, like Catelyn Stark and Cersei Lannister, driven by their fierce love for their children; as well as a numerous female warriors, princesses, and those who merely use their bodies’ to gain an upperhand. Additionally, there are also exotic, magical women, such Daenerys Targaryen, who hatched three petrified dragon eggs by walking into a burning funeral pyre; and Melisandre, the red women who brings a fiery, new form of sorcery to Westeros. The women in Game of Thrones don’t always gain the most footing while playing the game; in fact, they’re often beaten down just as brutally and just as quickly as their male counterparts. To their credit, they sure know how to put up a tough fight, and week after week, the women of Westeros prove they are some of the sexiest girls around.

Using the format from Brandi’s excellent post on True Blood’s Hottest Guys and Gals , I put together my own list of the Top 5 sexiest women in Game of Thrones. Here they are, starting with # 1. 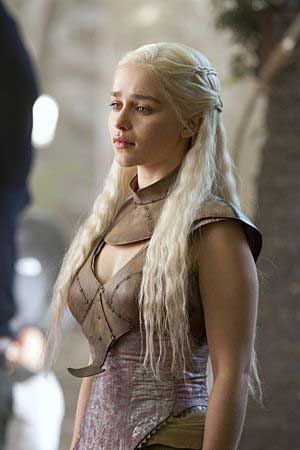 Played by the beautiful and immensely talented actress Emilia Clarke, Daenerys is one of the strongest and most resilient female characters in Game of Thrones. With her Targaryen-silver hair, along with her extremely sexy Dothraki rags and Qartheen clothing, Dany has captured the audiences imagination by portraying the once young, abused girl who has now grown up to be the strong, powerful Khaleesi and Mother of Dragons. Her mother-like qualities, along with her fierce and fiery Targaryen temper, are a perfecly sexy combination. Daenerys is a naturally kind, loving women, but she will take what is hers with fire and blood if she has to. You gotta love a woman who knows what she wants.

Daenerys is young and just coming into womanhood. She has a small stature and is very beautiful. She has fair skin and the signature Targaryen silver-blonde hair and purple eyes.

– Leader of a khalasar 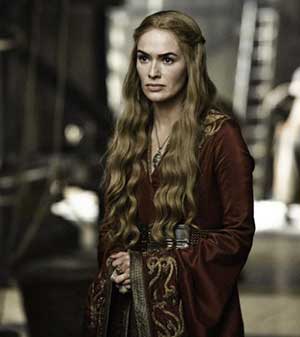 2. Cersei, the Lioness of Lannister

Portrayed by Lena Headey, Cersei Lannister is the beautiful, complicated Queen of the Seven Kingdoms. She has been essential to the twisted plot of Game of Thrones throughout the course of both seasons and has proven to be a cunning adversary for the men fighting over the Iron Throne. As Tywin Lannister’s first-born child and twin sister to the Kingslayer, Cersei was betrothed to Robert Baratheon after he rebelled against the “Mad” King Aerys and took the throne for himself. She currently holds the title of Queen Regent until her son Joffrey comes of age, while trying to tame and prepare the power-hungry young king for when it comes his time to rule. Cersei is often depicted in a negative light due to her willful and ambitious nature. She has a hard time dealing with the limitations placed on females in Westeros. Incredibly, she has carried out an incestuous relationship with her twin brother Jaime for years, giving birth to three illegitimate children. In order to keep this fact quiet, Cersei is extremely protective of her children and will kill any man who attempts to reveal her secret. These very events are what started the War of the Five Kings.

Cersei is beautiful, with classic Lannister looks. She is slender, has curly golden hair, bright green eyes, and fair skin.

– Only daughter to the richest man in Westeros 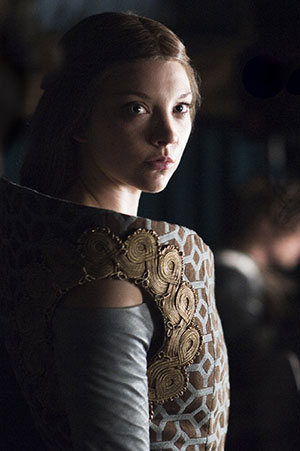 Margaery Tyrell, portrayed by Natalie Dormer, is the only daughter to Lord of Highgarden, Mace Tyrell, and sister to Loras Tyrell, the Knight of Flowers. A high-born lady, Margaery is a very intelligent, cunning, and shrewd young lady. She became the teenage wife of Renly Baratheon after he declared himself king, right up until Melisandre’s shadow baby came and gave him an early curtain call. While married to Margaery, Renly was having a very secret, and very gay, love affair with her brother Loras. Margaery didn’t seem to mind; however, and even offered to play the role of her brother in order to please her sexually confused king. I guess she aims to please her king in any way. 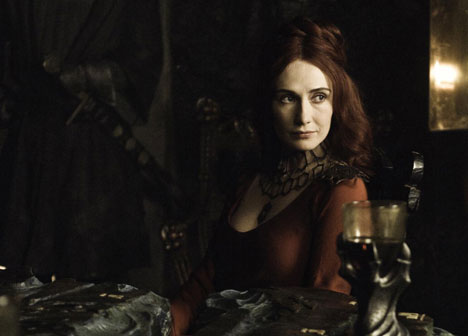 Carice Van Houten is the red-headed temptress known as Melisandre. The Red Woman has played a pivotal role this season with her fiery red hair, red robes, and mysterious nature adding to the allure of this exotic character. Melisandre claims to be a priestess from an eastern religion that worships a god called R’hllor the Lord of Light. She closely advises Stannis Baratheon, one of the many people fighting for the Iron Throne, on how to be victorious in the War of the Five Kings. She is convinced that Stannis is the the reincarnation of Azor Ahai, a mythical hero who wields a fiery sword and has been prophesied to defeat the divine nemisis of R’hllor, called The Great Other. Melisandre employs the use of a certain type of black magic, sex rituals, and is fond of saying “the night is dark and full of terrors” right before giving birth to shadow demons.

Melisandre is beautiful, with long red hair the color of burnished copper. Her body is slender and she is taller than most knights. She has full breasts, a narrow waist, and a heart-shaped face. Her voice has an exotic accent and she wears red clothing or crimson robes, as is the custom of her religion. She always wears a red jewel necklace that fits snuggly around her neck. 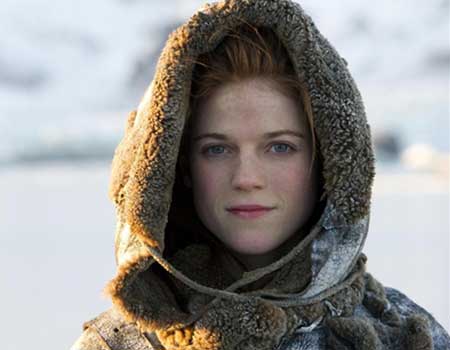 Played by actress Rose Leslie, Ygritte is a wildling woman and scout for Mance Rayder’s army. Jon Snow encounters her, and is asked to execute her, during his trecherous hike across the lands north of The Wall. He is unable to carry out the sentence, however, and succumbs to Ygritte’s seductive qualities. Ygritte is best described as being a strong-willed woman and extremely witty. Her red hair, referred to as being “kissed by fire” among wildlings, is considered lucky, very rare, and can act as an alluring quality and male aphrodisiac. Ygritte is the ultimate survivor and immensely skilled in battle.

Ygritte is around ninteen and described as short for her age. She’s skinny, but also muscular. Her face is round, she has small hands, and her teeth are white, but crooked. Ygritte’s most distinctive feature is her fiery red hair.

– Tells Jon Snow he knows nothing

What do you think Thrones fans? Vote in the poll and let us know who you think the sexiest woman in GoT is! Also, check out Eleanora’s article on the sexiest men of Westeros.

Note: Just for the sake of argument, the younger characters (Sansa, Arya, Myrcella, etc.) will probably make the list eventually. But given that they aren’t of age yet, adding them is just wrong on so many levels.