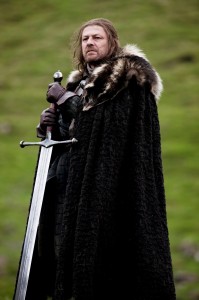 With season two of Game of Thrones less than 2 months away, I have been biding my time with season one reruns. While it’s great to revisit the whole first season, I was especially excited to re-watch particular scenes. Now there are plenty of notable scenes in season one, but there are a few that stand out from the rest.

Here are my Top 5 Most Memorable Scenes:

5. Bran’s… um, discovery and fall
One moment you watching this cute, young Stark boy climbing about the castle, the next he stumbles upon some serious incest. Bran accidentally catches Jaime and Cersei in the act and finds himself in a precarious position. You take a breath for a moment when Jaime seemingly lets him go, but gasp as he quickly shoves little Bran off the window sill. Though this scene happened in the first episode, it stuck with viewers all the way to end!

4. Daenerys eating the horse heart
This is was huge scene for Daenerys, who had struggled to fit the Khaleesi position. In this moment she proved that she could hang with the best of the Khalasar. A blood splattered Dany successfully devoured the whole horse heart, effectively sealing the approval of her new horse-lord husband and his people. Her performance and subsequent acceptance by the Dothraki people was even enough to make Viserys jealous. The image of Daenerys sinking her teeth into a dripping-raw heart is something I will not soon forget!

3. Tyrion’s trial in the Vale
After spending some time in the infamous sky cells, Tyrion arranges a ‘confession’ in order to get himself a trial. Once he gets his audience, he makes a mockery of Lysa Arryn in front of her vassals. But alas, his confessions of his particularly hilarious childhood sins don’t amuse Lady Lysa and they certainly don’t clear him of the charges of killing Jon Arryn or attempting to kill Bran. Tyrion is left with only one option, a trial by battle which ends with Bronn the victor and Ser Vardis taking a long fall through the moon door. 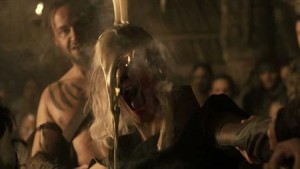 2. Viserys’ golden crown
Viserys acts like a royal asshole for much of the first season, threatening to ‘wake the dragon’ if he doesn’t get the throne he was promised. Well, in a moment of poetic justice, he gets the crown he has been so desperately searching for. Viserys enters a feast held by Drogo and begins threatening Daenerys and the life of their unborn child, demanding the crown he bargained for with his sister’s marriage. He changes his tune as Drogo raises the pot full of molten gold over his head, begging Dany to stop them. But he’s too little, too late. The viewers are left with the disturbing image of Viserys’ golden crown to haunt their dreams.

1. Ned’s beheading
Down to the last moment you were holding out for a hero. Arya was going to stab Ilyn with her needle, Cersei was going to override Joffery’s order, or Joffery was going to reveal that he was just pulling a sick prank and say, “LOLZ! JK!” But the execution wasn’t stopped. Off went Ned’s head and jaws across the world dropped. There is no denying that this was one of the most memorable scenes in the first season.

Which scenes did you find most memorable in season one?