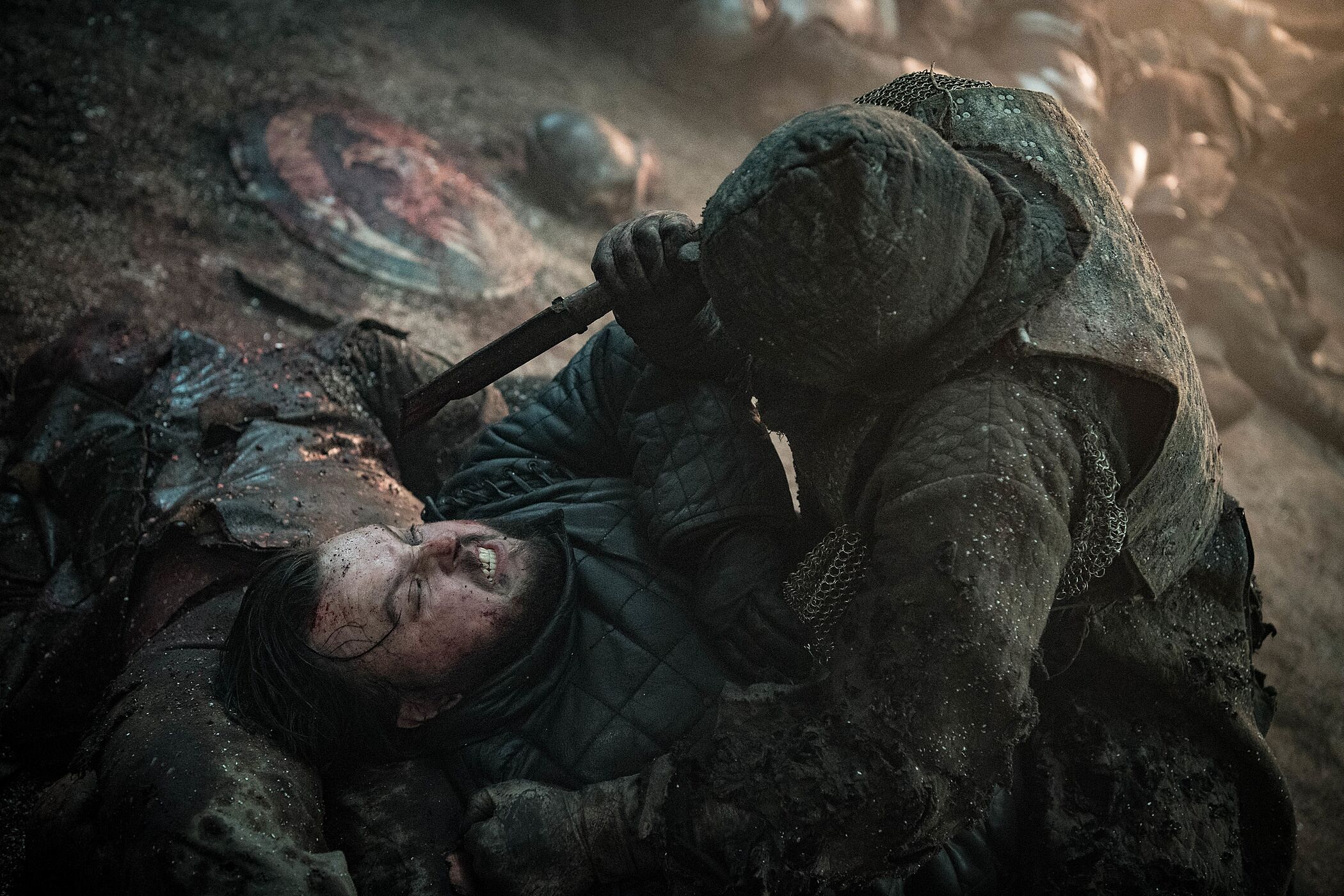 With eighty-two minutes of fear, exhaustion, terror, darkness, death, and destruction all around, I’d say that last night’s episode was at times, both exciting and stress inducing. Where to start? For those fans who have been complaining about the absolute darkness of the episode, I’d like to remind you of a few things. First, it’s supposed to be a nighttime battle. That adds to the sheer terror, uncertainty and overwhelming sensations that our Winterfell crew were supposed to feel. Second, it’s winter; daylight doesn’t last very long. Third, they’re called The Army of the Dead for a reason: they bring chaos, death, and destruction wherever they roam. This wasn’t going to be a day time battle sequence where everyone in Winterfell could see the enemy approaching and make their tactical plans and preparations properly.

Speaking of which: the episode opens up with a monotonous musical score, one that lends up to the eerie tension that’s building up in the darkness. It’s difficult to see what’s about to transpire and every single unit in the Winterfell army is armed and ready, ready as they’ll ever be. The only people who really know and understand that absolute terror they’re up against are Ser Jorah Mormont, Sandor Clegane, Beric Dondarrion, Jon Snow, Gendry Waters (Baratheon), Tormund Giantsbane and the late Thoros of Myr. The Army of the Dead keep moving, keep attacking and keep getting bigger because of the Night King.

Once everyone is assembled to where they all need to be, it’s showtime. Panic, adrenaline rushes and waves of anxiety came over me last night. From seeing Ser Brienne, Jaime and Pod trying to cut down the Wights, to watching Tormund and Gendry smash through with the axes, to Grey Worm command all of his flanks, this battle sequence did not disappoint. When the pitch-black night surrounds everyone in front of Winterfell castle, and the Dothraki and Unsullied have formed their defence patrols and flanks outside the walls, the unmistakeable sounds of the dead start up. You hear those blood curdling, eerie wails and you hear noises. A lone rider in the dark appears and it’s none other than the Red Woman, Melisandre. Yes, folks – she made good on her promise. She’s a flawed character and ends up having a redemption of sorts, but she shows up to help out where she can. And the army of Winterfell needs every single man and woman to help the cause. Yes, even Ser Davos, who has his personal score to settle with her, opens the castle gates to her. She brings fire and flames to the Dothraki army.

The flames surge forward and we see them charge into the darkness…only to see the flames begin to diminish. This is not an ideal start to the battle of the long night. Dothraki are down and the next line of defence is the Unsullied. My God, what a nightmare. The dead surge forward and you hear the shrieks, the rustling of feet and things coming at you in the dark. I can’t begin to imagine the sheer terror of being in a medieval battle like that! Our Winterfell crew may have planned for this battle but they are like lambs sent to the slaughter. Brienne, Jaime, and Tormund repeatedly yell to fall back. The soldiers are being decimated an unprecedented rate.

Theon and a group of Iron Born are in the Godswood, protecting Bran in the hopes that the Night King will be lured there. In theory – it sounded great – but the harsh reality is that they were outnumbered, had no huge cache of weapons and no additional support to help them in case the White Walkers and the Night King showed up. More on that in a little bit. In the crypts, we have Tyrion, Sansa, Varys, Gilly, little Sam and many women and children. Technically, the crypts are a safe place to be, especially for those who can’t wield a weapon or have no battle experience. But, one thing to remember, folks: the Starks of Winterfell never burn their dead, they bury them. You can see how this small fact ends up being a HUGE problem later on in the episode.

Jon and Dany, together with their dragons, are seen at various points in the episode – either defending Winterfell from the hordes of Wights, or trying to battle with the Night King and the undead Viserion. It’s scary to see the power of dragons and when they battle, it’s just awful – poor Rhaegal, he’s attacked at various points and obviously very weakened. Dany continues to stay atop her dragon and help the Winterfell army on the ground by unleashing dragon fire. The trouble is – during all their attempts to help out the folks at Winterfell, they didn’t account for the fact that the Night King not only rides a huge undead dragon with an even deadlier type of flame (blue) but also creates a veritable snow and ice storm, thus thwarting the actions of every single archer on the wall and sputtering out any type of flames. And we all know that fire kills Wights. And those trenches aren’t going to light themselves. Aren’t you happy that Melisandre showed up when she did?

The battle wages on the field, the troops withdraw to the entrance of Winterfell and in a valiant attempt, the Unsullied get into action, ready to defend the retreating soldiers. It’s a massacre; dead bodies litter the ground; fire and smoke surround you; you can’t see who’s behind or beside you, making you second guess your next step. Adrenaline and fear are highly charged emotions felt and displayed by many of our Winterfell army. Unfortunately, there were casualties and the Army of the Dead just kept on charging forward.

The dragons dance in the air with each other, shooting flames, biting each other and flying precariously through ice mist, clouds, smoke, and fire. Many different perspectives from the battle gave you the feeling of fear, weariness, fright, pain, and shock. Just look at The Hound – clearly suffering from PTSD; to Tormund and Gendry who are bashing their axes left and right, with body parts and blood oozing all the place. Grey Worm covered in sweat, dirt, ash, and blood, determined to defend the castle to the end, no matter the cost. In the crypts, as the dead members of House Stark begin to dig their way out and create panic and chaos with the women and children; to the looks of terror on Tyrion and Sansa’s faces, when it looked like all hope was lost. Those two need to get back together. Inside the great hall, The Hound, Arya, and Beric fighting through waves of Wights; Jon just running through the field, amidst the smoke and dead bodies everywhere, in a feeble attempt to kill the Night King. 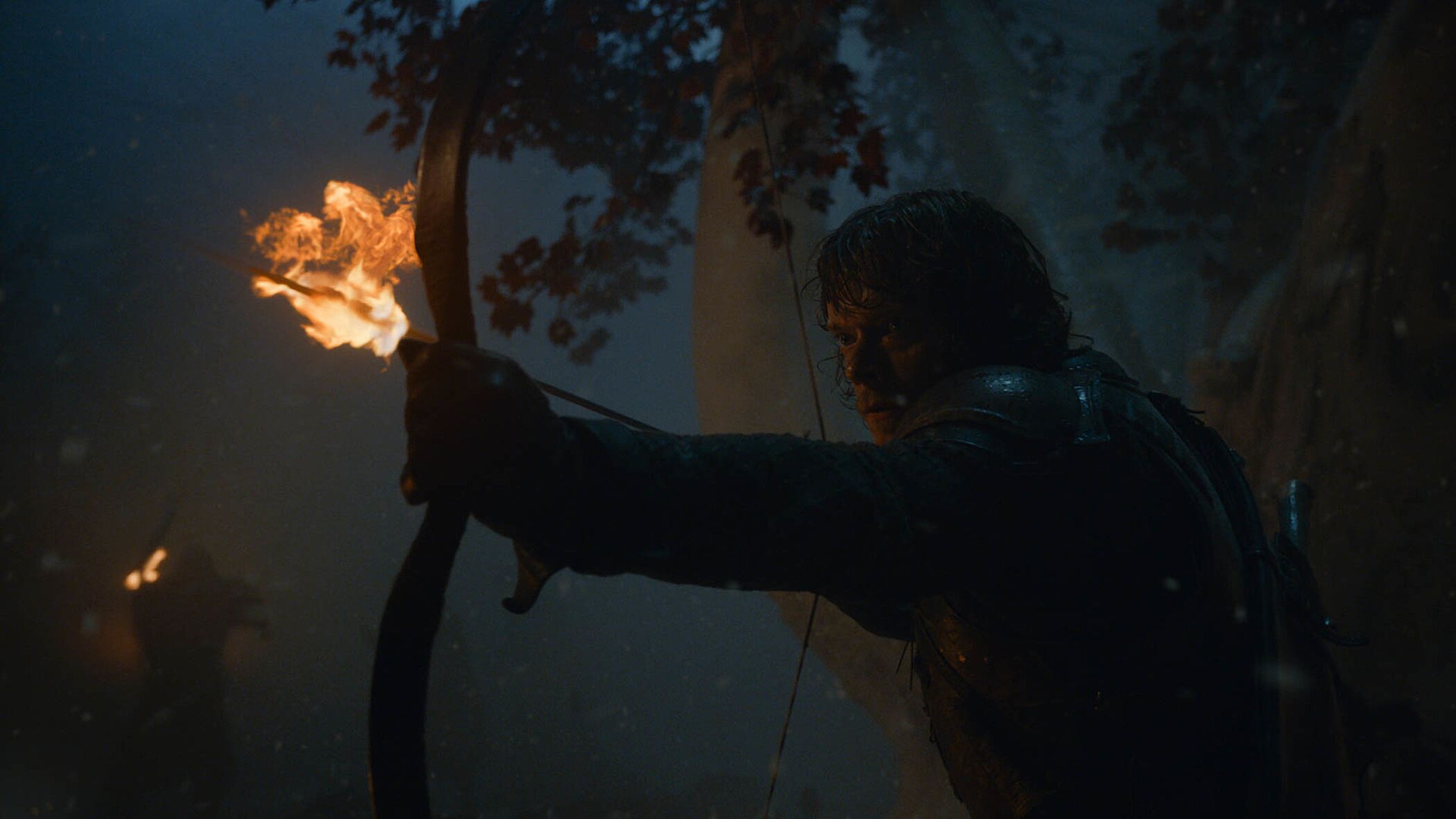 Let’s take a moment to honour the following members who not only fought like hype beasts, but went out like heroes, bosses, a combination of both or just plain damn LEGENDS. Dolores Edd saved Sam, only to fall. His watch truly ended. Lady Lyanna Mormont fought fiercely and brought a dead ice giant to its doom, before succumbing to her mortal injuries. I’d like to think that Tormund would raise a horn of ale to the fierce little she-bear. Beric Dondarrion sacrificed himself inside the castle, during a horrific hallway siege in which Arya and The Hound were fighting back groups of insane numbers of Wights. Theon Greyjoy sacrifices himself, in order that Bran can live to see another day and it is heartbreaking. We went from not liking him in the beginning; to seeing him become conflicted in his family; to being captured, tortured and in distress; to seeing him become prey for Ramsay; to finally breaking free with Sansa, to becoming the man he was and becoming a Stark. Theon Greyjoy: you’re a good man. Ser Jorah fought strong and hard right up until the very end. What a warrior. So sad for House Mormont. When Dany was crying and Drogon placed his wings around Ser Jorah, just pass the Kleenex already.

What’s interesting to note here is that for the past couple of seasons, so many people were hyping up Jaime, Jon, or Dany as the heroes who would end up killing the Night King. Nobody gave a second thought to another member of House Stark, perhaps not as honourable and nobody would’ve given credit where it’s due: Arya, the second daughter, not expected to make as high or as illustrious a match as her sister, Sansa. Arya, who was the ragtag tomboy little sister, forced to run away with Yoren and a group of men, on their way to the Wall. Arya, who became a hardened child soldier, and learned to survive and fight in the school of hard knocks, under the tutelage of Jaqen H’ghar. Arya, who was given the Catspaw dagger by her brother last season. Let me tell you – I don’t know who cheered and screamed louder – me or my neighbours.

Though the battle was won, once the Catspaw dagger found its’ way into the Night King’s belly, so many lives were lost, so much heartache and pain to endure. The army of Winterfell was all but scourged, with only a tiny fraction of soldiers remaining. One battle has been hard fought. There were no winners in this situation, only survivors. Now, the battle for the Iron Throne will wage on. Who will live? Who will die? And who will tell the tale to the generations of people to come?

Check out the preview for next week’s episode below:

What were your thoughts on “The Long Night?”