Ramin Djawadi has once again delivered to the highest of expectations with his score for Game of Thrones’ third season. Despite having few standout “themes” as such, the overall flow and fluidity of the soundtrack as a whole is thoroughly enjoyable and wonderful to behold. Despite being the shortest of the three, it is undoubtedly the most ambitious and best musically.

The fact that Djawadi has managed to incorporate so many moods and connecting motifs in his work is a testament to his musical genius. The music in itself tells a tale; one of tragedy, bitterness, and hopelessness, yet culminating on such an optimistic note that our spirits are lifted after the struggles of the journey.

The track listing is as follows: 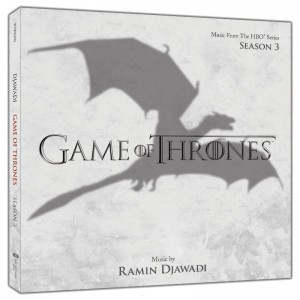 02: A Lannister Always Pays His Debts

16: The Lannisters Send Their Regards

It is worth listening and comparing this soundtrack to the soundtracks for the previous two, not only for the music itself, but for the connecting themes and ideas that intersperse throughout. What will follow is a short analysis of each track and how it fits within the overall narrative.

Djawadi has completely outdone his previous work with this soundtrack. I must admit, I was slightly disappointed that a few themes were not included, such as the slow version of “The King’s Arrival” as Gendry surveys the Red Keep, and “Warrior of Light” when he arrives at Dragonstone. However, judging the soundtrack on its own merits, it was the most ambitious so far, and it quite surpassed those very same ambitions. Mhysa is undoubtedly the best track Djawadi has composed thus far, and instills a sense of elation and such catharsis of emotion. It really must be heard and experienced to be believed.

Worthy mention: You Know Nothing

Take a listen for yourself on Amazon!

These soundtracks are a must for any Game of Thrones fan who wants to feel like they’re living in a castle on the edge of Westeros.  You’ve already got the direwolf in the back yard and a fresh set of  heads on stakes to detour any possible intruders.  Why not crank up this music while you’re away to further deter any thieves?

The soundtrack is available to download NOW from iTunes, [amazon_link id=”B00D4IFD4I” target=”_blank” container=”” container_class=”” ]Amazon US[/amazon_link] and Amazon UK, and the physical CD is set for release on July 9.

Cian is a student of Theology and History. He frequently confuses the real world with Westeros, and if he’s not talking about A Song of Ice and Fire…he’s talking about Game of Thrones. Mainly interested in old HBO classics such as Rome, Deadwood and The Wire, he currently maintains a vested interest in Boardwalk Empire, Treme and Game of Thrones.