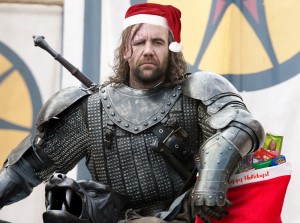 Given the sheer volume of content packed into George Martin’s A Song of Ice and Fire some fans have criticized HBO and their epic production of Game of Thrones for not featuring more episodes per season.  Well it’s time to break out the Arbor Gold because EW is confirming that each episode of Game of Thrones season 3 will be around 57 minutes as opposed to the normal “low 50’s” seen in season 2.

“There’s almost another full episode’s worth of extra minutes spread across the season,” Weiss says. “One of the great liberties with HBO is we’re not forced to come in at a specific time. We can’t be under 50 minutes or over 60, but that gives us a lot of flexibility.”

“So for people clamoring for another episode, it’s in there,” Weiss says. “It’s just been cut into tiny pieces.”

Most DVRs will pick up on the show times and take care of this so you needen’t do anything other than sit back, relax and get ready for another journey into the world of Westeros (and Essos!). Consider this a little Holiday present from the makers of Game of Thrones to you. HBO makes it all possible.

See you in March.