Winter is finally here. And for all of us Game of Thrones fans, the long wait begins. Until next spring, we’ll all have to content ourselves with various tidbits of information about the HBO show where ever possible. The awesome folks at HBOWatch have decided to pick their personal favorite scenes of season six and will share them with you. 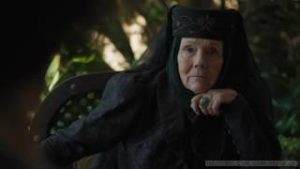 The Tower of Joy by Eleonora Iafano

My personal favorite was the Tower of Joy flashback and segues into the King in the North scene. This was one of the most highly anticipated scenes of season six, and for good reason. For those that have read the books, you know the theories of “R + L = J.” On any given Game of Thrones fan site, such as Reddit, you’d find an enormous response to set theory. Show only fans have the series to rely on, in terms of information. This scene did not disappoint. It begins with Bran (now the Three Eyed Raven) touching a weir wood tree. We are transported back to the Tower of Joy, with young Ned rushing up the stairs and into a room where he finds his sister Lyanna lying down…in a bed of blood.

His shock, fear and disbelief at being reunited with his sister pales in comparison to what her BIG reveal is: a baby has been born, her son…..and then the famous last words of Lyanna Stark are stated: “Promise me, Ned. Promise me.”

Young Ned is horrified to find out the child’s true parentage, as Lyanna whispers the child’s name and presumably the father of set child into his ear. The baby is then laid in Ned’s arms and as a lone tear slips from Ned’s cheek, his sister’s words ringing true in his head. He knows that his best friend, Robert Baratheon, is on a murderous rampage – killing every single Targaryen in his path. He knows that Robert wouldn’t blink twice at killing a baby. And this child is HIS nephew and Lyanna has now placed one hell of a burden into his hands – Ned must choose between family duty and his relationship with his best friend.

The first time we saw the flashback to the Tower of Joy was the sword fight between Ned, Howland and a few other comrades against Ser Arthur Dayne and another Targaryen soldier. You have to wonder WHY Rhaegar’s personal Kingsguard would be guarding the Tower of Joy. It HAD to have been for a VERY important reason. As in, a secret pregnancy and perhaps the woman in the tower giving birth was Rhaegar’s second wife. Bran sees the events of the first and second flashbacks and it appears as if he is crying. How could you not? You find out that your father didn’t exactly beat Ser Arthur Dyane all by himself and THEN you find out that your half- brother, Jon Snow….isn’t exactly your half -brother anymore. That’s pretty mind blowing news to accept and digest. As Ned stares in shock and horror at the tiny baby in his arms, the baby opens his eyes. We see dark, brooding eyes look up at Ned. Seconds later, we see those dark, brooding eyes staring straight at the camera. Jon Snow sits in the great hall of Winterfell, with Sansa at his side and all their banner men seated at the tables. Jon impresses upon the northern men that even though the Boltons are soundly defeated, there’s a greater threat to the Seven Kingdoms and it’s not going to stop for anything. The winter only adds to their defense – because as we’ve seen before, the dead don’t rest.

And that’s when we get the tiny little badass of Bear Island, Lady Lyanna Mormont, who rouses the banner men with her fiercely loyal speech on why they should follow Jon Snow as the King in the North. Not only does this little girl have the balls to call out House Manderly, Glover and Cerwin on their lack of participation in defending House Stark against the Boltons, she single handedly proclaims Jon Snow as THE King in the North, and doesn’t care that he’s bastard born. What matters is that a Northerner, who understands their way of life, is the one to lead them. With her support and declaration, the other prominent men from Northern houses not only pay homage to Jon, but also acknowledge the Lyanna Mormont is correct in all of her assessments of the current events that took place in the North. I find it fitting that a young girl named Lyanna was the one to throw her full support behind Jon Snow, thus bringing the rest of the Northern houses into the fold and having them declare their full allegiance to House Stark and Jon. This is my favorite scene because it blends the past with the present, it shows just how damned resilient and tough the North is and that “The North Remembers.”

“The Demise of Ramsey Bolton” by Alexandra Mitchell

When Joffrey reigned, many fans couldn’t believe there could be a worse person in the Seven Kingdoms. Enter Ramsay Bolton. Compared to Ramsay, Joffrey is ice cream on a beautiful summer day with a nice breeze. Ramsay’s penchant for violence and sadism is truly terrifying. Or should I say was…

With Sansa’s escape from Winterfell and reunion with her brother Jon, the build up to conflict with Ramsay was palpable.  Tension soared as the Starks made their way to confront Ramsay.  After the toil and mass bloodshed, Jon nearly took Ramsay’s life himself, but stopped at the last minute to allow Sansa the ability to do it herself.  Now, Sansa is not a vicious person by nature.  But after everything Ramsay put Sansa through, you can’t blame her for wanting some sweet, sweet revenge.  Ramsay not only emotionally abused Sansa, but violated her in a way that will be with her the rest of her life.  She deserves the moment to make him suffer.

The way Ramsay meets his end is beautiful karmic justice in my opinion.  Ramsay’s own weapon, his hounds, are one of his main tools for exerting power and control over people.  He starved the hounds for a week before the battle so if he needed them, they would be hungry.  In reality, his hounds are just as abused as Ramsay’s other victims.  So their munching on their boss is just justice.  To me, it’s the scene of the season because it brings closure and justice for Sansa. She is not the little girl who left Winterfell so many years ago.  She’s a survivor, and she will keep surviving no matter what is thrown at her.

Trial of the Seven Septons by Jason Godfrey

After “trial by combat” was deemed illegal by her own son, King Tommen, it would seem that Cersei was left with no choice but accept her fate in her Trial of Seven Septons. The scene opens up with what may be the creepiest music since Rains of Castamere. We see characters getting ready for the day ahead. Very few words are spoken before the trial. Qyburn’s little birds make a return to the screen. They dispatch of Lancel and Maester Pycel. Qyburn states that in order to “usher in the new, the old has to be put to rest”. Not only is he referring to the new order established by the end of the episode with Cersei as Queen, but also the new Cersei herself. The way she mocked Pycel was a form of comedic relief and that part of her most likely died with him much as her compassion died with the suicide of her remaining child. The King’s Landing scenes moved slowly this season. The opening scene to the finale of season six was no exception. Despite it being one of the more eventful scenes in King’s Landing, it deliberately moved slow but in a way that made it feel creepy and suspicious. When the wildfire is finally revealed, it’s obvious that it’s too late for any of Cersei’s enemies. She may not be the Mother of Madness anymore, but a Mad Queen.

“The Mother of Dragons” by Rhiannon Kavity

There was an unbelievable amount of amazing moments this season. In fact, it was my favorite season of the whole series. It was extremely hard to narrow down just one scene that gave me absolute chills as there were so many. Daenerys has and always be one of my favorite characters (aside from Lady Sansa Stark who I called from the very beginning would be a huge pivotal character). We’ve watched her grow from a weak, unsure child to this brilliant, self-confidence 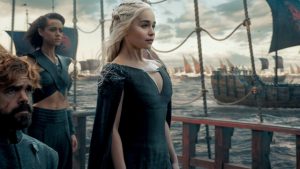 , maybe a little arrogant Queen. And more so than that, we’ve watched as she inspires huge groups of people, cities worth, to follow her. She inspires so much confidence and hope in so many different types of people, from slaves in Meereen to Dorthraki Khals to Unsullied soldiers. She has won the heart of Tyrion Lannister, who has dedicated his life to seeing her on the Iron Throne, despite the fact that Westeros was built on the back of his father and his own family currently rules the kingdom.

The season ends with Dany finally crossing the ocean, heading to Westeros to take back what is so rightfully hers. Each ship holds hundreds of her men, all prepared to die for her. The camera takes the time to zoom in on each of her trusted advisors, showing Tyrion standing directly beside the Queen with his new Hand pin proudly pinned to his lapel. We see the dragons flying overhead, their shadows on the water below and we see Daenerys smile, knowing that the battle has only begun.

It was one of the most beautiful scenes ever shot on the show and I’m so excited to see what will happen next. The buildup for this moment has been six seasons in the making and to finally have it happen has the readers feel their own sense of victory. Seeing what the Mother of Dragon’s does next is going to be an amazing thing.