Things have been fairly quiet on the Game of Thrones front, lately, but thanks in large part to the show’s success at this year’s Emmy Awards, there has been a sudden frenzy of news.

First up, author George R.R. Martin attended the Emmys, and had a lot to say about Game of Thrones and beyond. In a red carpet interview, Martin suggested that he was sad to see the show ending so soon, with its final, eighth season airing early next year. Martin told Variety magazine that he envisioned the show going for “eleven, twelve, or thirteen seasons.” That being said, Martin understood that many of the show’s actors, who have been working with HBO for almost a decade now, are ready to hang up their fancy wigs and fluffy capes once and for all: “I know all of the actors, as great as they are, all the actors are anxious to get on and play other roles. They don’t want to spend their entire lives playing one role and that’s fine, that’s great, we had such an amazing cast.”

The good news is, while Game of Thrones’ original actors may be moving on, HBO isn’t parting ways with Westeros anytime soon.

Later, the same night, Martin confirmed that the working title for the upcoming Game of Thrones prequel show is “The Long Night.” The show, which is to be directed by Jane Goldman is set to begin filming early this Spring. From what little we know, it will follow the more magically-infused moments of history that preceded the “game of thrones,” and give audiences a glimpse of the formative moments that shaped the Houses and families we know and love (or love to hate).

Martin also touched on the differences between Game of Thrones and his unfinished A Song of Ice and Fire series at the Emmys. “The bulk of the [final] season is based on what I planned,” Martin told an interviewer. When asked how he would describe the final season, he gave signature response: “Bitter-sweet.” Martin, who just celebrated his seventieth birthday, has been intimately involved with Game of Thrones‘ production since the beginning, as you can see from this newly released photo of his un-aired cameo in the disastrous first attempt at the show’s pilot.

While George R.R. Martin may still lack a cameo in Game of Thrones, he did recently become immortalized as a Funko Pop figure, beside the show’s writers, David Benioff and D.B. Weiss. Funko has a strong and well-populated line of vinyl Game of Thrones figures and has recently announced a new wave of collectibles inspired by the show, with characters such as Yara Greyjoy, Varys, Beric Dondarrion, and Bran Stark. If you’re into GOT merchandise, you can check out all of Funko’s newly announced offerings here— who doesn’t need a Tyrion Lannister key-chain in their life? 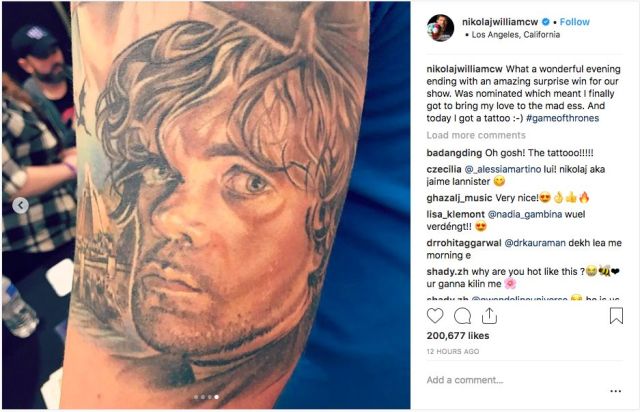 Tyrion, and perhaps more-so, his co-star Peter Dinklage to new heights, recently, by recently getting a very large tattoo of Tyrion’s face. That’s dedication. Dinklage and Coster-Waldau were both up for an Emmy for their work in Thrones, which Dinklage ultimately nabbed, but clearly the stars are still on good terms.

Nikolaj Coster-Waldau wasn’t the only Game of Thrones star to permanently memorialize their time on the show, lately. Actress Emilia Clarke (Daenerys Targaryen), recently got her three on-screen children…er…dragons, tattooed on her wrist. As you can see, from her Instagram post, she looks pretty pleased with the final result.

Game of Thrones‘ final season isn’t the only thing to look forward to next year. For fans of the the book series the show is based on, or those who just love Westeros’ unique world-building in general, Unseen Westeros  is an art exhibition opening in Berlin this January that will show-case artwork of more obscure locations in the fantasy world.

Finally, does anyone remember the Game of Thrones Telltale video-game that dropped back in 2014? It was strikingly well-done, with voice-acting by actors from the show, and was a fun way to pass the time in-between seasons. Sadly, however, while some of us were still holding out for a second installment of the game, which left off on a bit of a cliff-hanger, it appears that Telltale is shutting down. I haven’t returned to the game since I reviewed it in 2015, but I remember it being surprisingly in line with the quality and complexity that Thrones fans have come to expect. It is too bad that the game’s story-line will never have any resolution, but then again, Thrones fans, at least those who are also fans of Martin’s book series, have a lot of practice when it comes to dealing with the disappointment of an unfinished creative project.

That’s all for now! We still don’t have an official release date for Game of Thrones Season Eight, but the first day of autumn is today, so we can officially inform you that “Winter is Coming.”