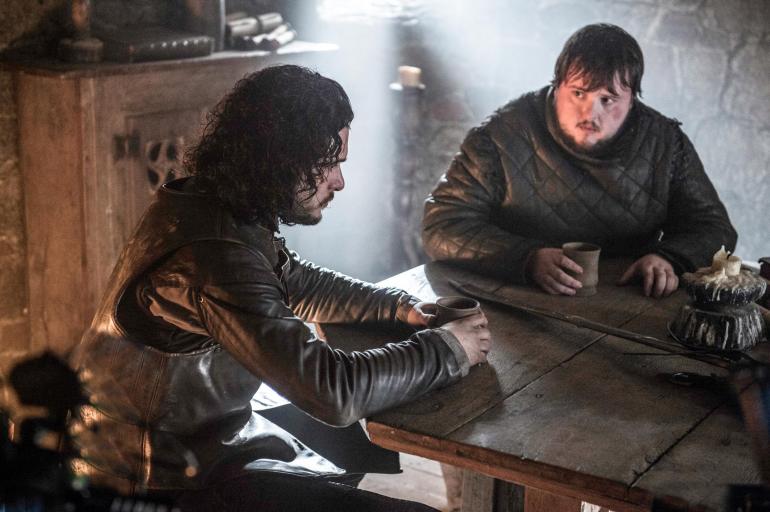 Everyone still alive out there? Probably not if you watched the season finale. I’m pretty sure the entire world is still recovering, myself included. I’m not sure if I’ll ever recover. It felt like a good portion of this season was slow, setting up major plot lines that will hopefully be explored later, with a few dramatic deaths and character changes thrown in for good measure. All in all, the series continued its tradition of powerful episodes for the second to last and final episodes of the season.

“The Fires have melted the snow away.”

Melisandre is probably my most hated character. It only becomes worse after she convinces Stannis that the way to victory is to burn his little girl alive and sacrifice her to their twisted God. It’s a brutal, unbelievably cruel scene that still replays in my head a week later. The plot comes full circle with Selyse, his wife, hanging herself after no longer being able to live with herself after agreeing to her daughter’s murder. Melisandre has officially stripped Stannis of everything, leaving him only with herself and his vengeful mission for the Iron Throne.

“I’m glad the end of the world is working out well for someone.”

I say it almost every time I review an episode, but the relationship between Jon and Sam is one of my absolute favorites. Jon was never given the true brotherhood he so desperately wanted from his blood brothers. He was always second best as the Bastard, never included in the inner circle of the Starks. With Sam, he finally has that love and kinship he always wanted. The way the two interact, completely open with one another, even sharing secrets that could get them killed for betraying their Night Watch oaths, is so powerful to witness. The fact that Jon jokingly asks about how Sam could possibly have sex with all his injuries only makes it more enjoyable. There’s still a little bit of humor at Castle Black. 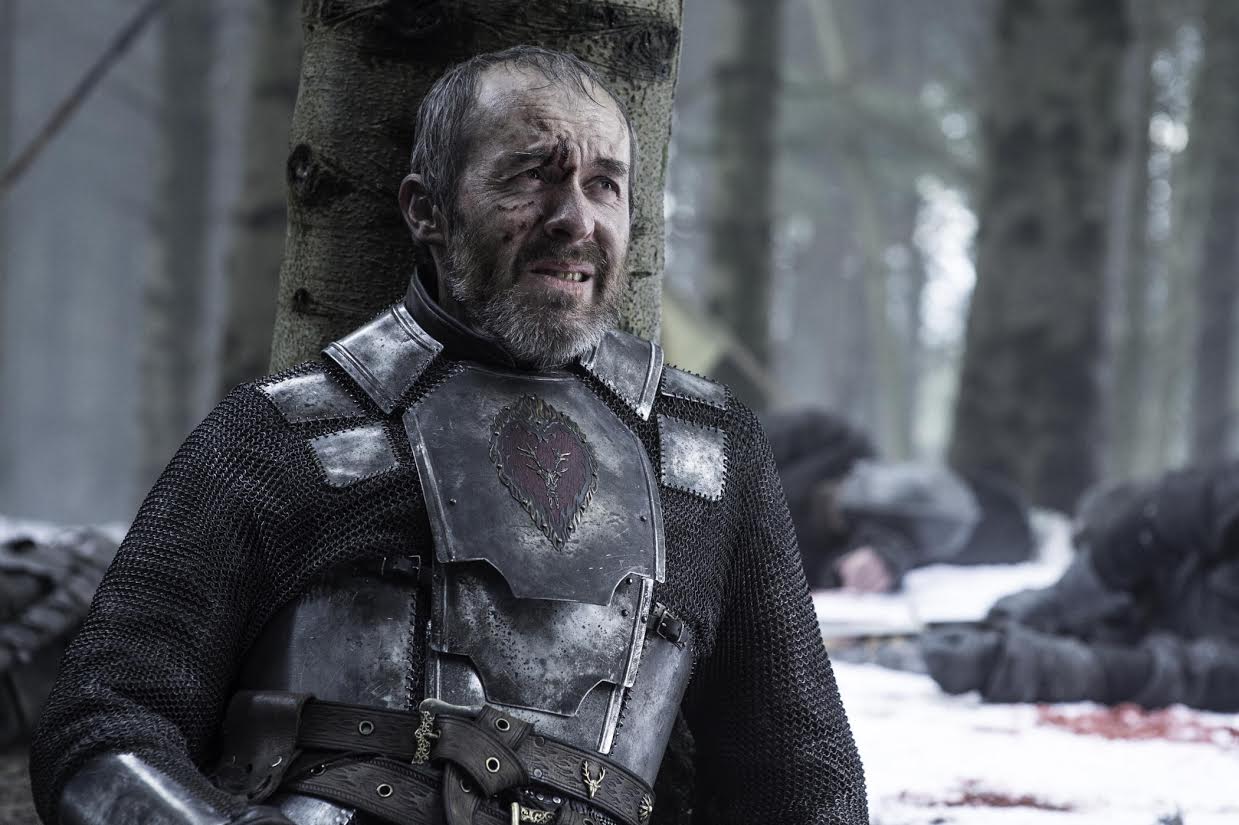 “I, Brienne of Tarth, sentence you to die.”

For quite a while, we have watched Brienne’s loyalties sway from person to person and house to house. She wavered from Renly Baratheon after his death, pledging herself to Catelyn Stark, only to falter again when she began to develop a connection with Jamie Lannister. This episode, we see her return to her original devotion as she declares that Stannis Baratheon must die. The scene ends with her swinging her sword, leaving us wondering if the Lady Knight goes through with the execution or if something, or someone, intervenes to save Stannis.

“If I’m going to die, let it happen when there’s still some of me left.”

I’m well aware the entire world hates Sansa Stark. I’m probably the only one who completely adores her, which I’ve already argued in a previous piece. Part of Sansa’s limited power is the fact that she sees so much more than other people do. It’s a captivating scene as she watches the battle begin from the window, knowing that her fate rests with whoever wins. She is doomed to either become a pawn in Stannis’ rule or to continue being a slave to Ramsey’s insanity.

She flees, attempting to gain some kind of ground as the battle goes in Ramsey’s favor. For the first time in a long time, we see Theon Greyjoy reappear as he saved Sansa from Myranda’s arrow and help her to jump to her escape (or possible death?). This was not a decision he made on his own, but rather one Sansa coaxed out of him the last few episodes as she slowly but surely reminded him of who he really is and what he was to her and her family. 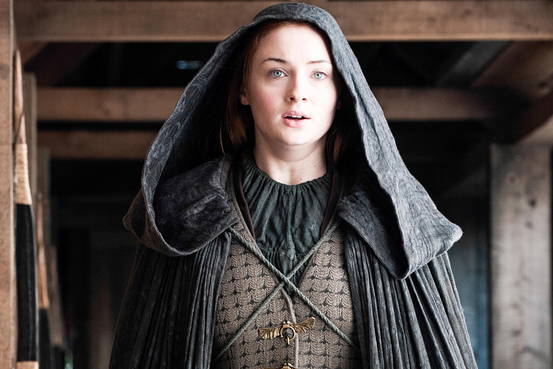 Arya’s first brutal murder is almost difficult to watch. While it has a sense of poetic justice behind it that she is finally beginning to enact her revenge and cross names off her list, it’s still difficult to watch her transition so seamlessly from the little girl who wanted sword lessons to a trained assassin who didn’t flinch while brutally torturing and murdering a man. The scene that follows is quite possibly one of the most disturbing the show has brought to us yet. As Arya sees her own face on the dead, the life sacrificed because of her betrayal of the cause and the fact that she went against her mission to serve her own agenda, is stirring in a very uncomfortable way. I’m curious to see exactly what happens while her training continues and the mystic nature of the No-One group are continued to be revealed.

“I know. I think I always knew. And I’m glad that you’re my father.”

I was slightly bored during the heartwarming chat between Jamie and Myrcella, especially when it came to her instant acceptance that she was born from incest and didn’t plan on adding it into the review as there isn’t much I can say about it except “ew” but I have to say, I didn’t see her poisoning coming. But GoT seems to be pretty awesome at unexpected deaths (something they cash in on this episode).  I thought it was slightly odd when she was given a kiss goodbye, which was a nice touch on Dorne’s part. Poisoning the Princess is an all out declaration of war, one that should lead to many interesting plot lines in the future. It also adds another item to the list of things Cersei is going to want revenge for. I’m curious to see if this ignites some of the fire that has died inside Jamie, who has gone from Kingslayer to passive bystander in the last few seasons. I’d love to see him get back to his destructive, slightly barbaric roots. 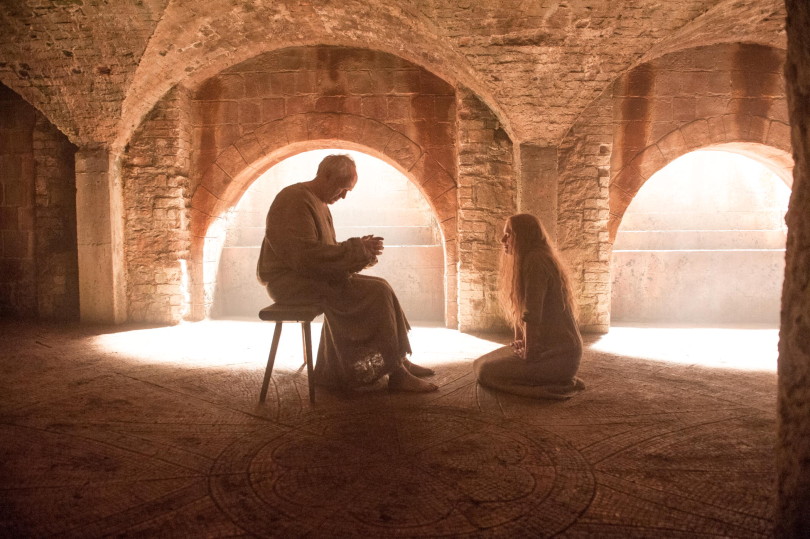 “May the Gods forgive me.”

Cersei is one of those characters I will forever love to hate. I feel an unexplainable connection to her, despite all the horrendous things she has done. As she confesses some version of her sins, leaving out all of her worst indiscretions, she plays the meek desperate mother who desperately needs her son. It’s obvious this is merely a plot to disband the High Sparrows, an organization she resurrected for her own devices only to immediately regret her decision when they turned on her. We see her stripped of herself, as she is scrubbed down as though worthless and filthy and her hair is sheared off, a sign that she is no longer a beautiful, desirable woman.

As though being left naked and wide-eyed in her cell to reflect on her complete undoing isn’t punishment enough, she is then forced to walk naked through the city while the word “shame” is chanted behind her to atone for her sins. Her body is no longer her own, but rather everyone else’s as she marches dirty and bleeding through the city. It is the moment where we finally see the mighty lion fall, skinned and left for the slaughter as everything she has ever been, the beautiful regal desirable Queen, falls away while the villagers berate and curse her. Lena Headley has always amazed me as an actress. The way she has brought this character to life is one of the best portrayals I’ve ever witnessed and this scene is quite possibly the most powerful scene the show has ever given us, leaving me with a bitter taste in my mouth and a sense of sympathy for a character we have all been groomed to despise.

In the most climactic turn of events all episode, we watch as Jon Snow is brutally murdered by his Brothers, who take turns stabbing him in the name of the Watch.  This death was the most unexpected we’ve ever had, even more so than the Red Wedding. [EDITOR EDIT: Previously, this stated the death of Jon Snow did not occur in the books. This was inaccurate and was incorrect information given to the writer, who hasn’t yet read them to keep her reviews authentic for the many viewers who only watch the show. Our apologies! ] Book readers and show watchers alike were shocked by the conclusion of the episode, which showed a close shot of Jon’s face as he lay dying, surrounded by people he thought would give him the life he always wanted only to turn on him in cold blood. This particular scene, and the meaning behind it for the future of the show, will be further discussed in an upcoming article so keep an eye for it!

The episode as a whole was a fair way to say goodbye to the season for the next nine months. It left us reeling, which is something the writers strive to do with each big episode of the season. Anyone who has been with the show for the last five seasons knows that no one is safe and that anyone can die. With the death toll skyrocketing this season, that’s been more than proven.

The cinematography in this episode was wonderful. I’ve always been a sucker for a wide shot, dramatic scene and there were more than a few. My favorites are tied between the moment Sansa witnesses the battle below and when Tyrion stands on the steps of Meereen, above everyone else, looking like a King. Anyone else Team Tyrion for the Iron Throne?

The episode leaves us with endless questions, ensuring that we will tune in for next season to find out exactly what will happen to our beloved characters (the few that are left, that is). How will Castle Black fair without the honorable Jon Snow? What will happen with the White Walkers? Did Brienne actually kill Stannis? What will happen to Dany as she’s surrounded by hundreds of strangers (friend or foe?) and in that vein, what will happen to her small kingdom if she is no longer there to lead them? Will we finally get to see where Bran has been for the last season and what exactly he’s been up to? How will Cersei get her revenge (because we all know that is coming)?

Game of Thrones has always, and probably always will, have the power to captivate its audience. This finale did that and more. Over the next few weeks, HBOWatch will be posting articles that dive into some of these questions, attempting to decipher what exactly happened this episode and predicting what will come next for Westeros.