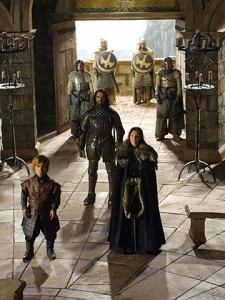 HBO’s foray into the fantasy world of George R. R Martin is paying off for the premium cable network.  Game of Thrones (which premieres in the US on April 17th) has already become HBO’s best selling series abroad… ever.   At 2.5 million dollars an episode, Game of Thrones sells for almost %50 more than an episode of The Sopranos.  Bill Nelson, the network’s CEO, had this to say about their international presence:

“We have significantly accelerated our international thrust over the past few years.  We have broken through at a much, much higher level than in the past, and have found that our programming not only crosses geographical boundaries but cultural ones as well.”

While growth in the US has waned in the recent down economy holding steady at around 40 million subscribers, HBO is still making leaps and bounds internationally jumping from 30 million subscribers to almost 40.  The Wall Street Journal also noted that Game of Thrones hits several key strategic markers for the company including international focus, original programming and technological advancement.  (Source: WSJ)

And if that isn’t enough to keep you on the edge of your seat take a look at the latest promotional video HBO has released for the show entitled ‘poison’.

Game of Thrones premieres this Sunday night at 9PM.  Stick with HBOWatch for full coverage of the premiere!