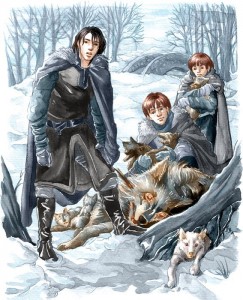 WARNING – Minor Spoilers – Direwolves are beasts of mythical proportions. They also happen to be the sigil of everyone’s favorite Northern Family, the Stark’s. They hadn’t been spotted south of the Wall in thousands of years, until the Stark boys happened across an orphaned litter of pups. The mother had died, but the pups survived. Ned, the father and leader of house Stark, resolved that they should kill the animals to free them from a slow death, but he was halted by his bastard son, Jon Snow. Jon convinced him that these pups, of which there were five, were meant for Ned’s five children. Ned relented and the pups were collected. It was only then that noticed there was a sixth pup, an albino direwolf pushed off from the rest.

While direwolves aren’t typical pets, even for the fantasy world of Westeros, these wolves play an important role in the lives of the Stark children, often coming to their aid when their help is most needed and sharing particular similarities with their owners.

Grey Wind belongs to the eldest Stark, Robb. Loyalty and duty are the words that come to mind with both Robb and Grey Wind. It is duty that drives these two to war against the Lannister’s and their bannermen. This pair is forced to grow up quickly in the wake of Ned’s arrest and subsequent death. They ride off to avenge Ned’s death, but battle isn’t the only challenge they face. Robb is still very young and has some trouble holding the respect and loyalty of some of the Stark bannermen called upon to fight. When challenged by Greatjon Umber, Grey Wind helps Robb to assert his place by biting off a few of Greatjon’s fingers.

Lady is just as her name describes, a lady! She is the perfect pet for the lovely Sansa Stark. She is as well-mannered as her owner and is just a beautiful. Her life is quite tragic, also very like her owner. Both find themselves at the mercy of the Lannister’s, or more specifically, Joffery Lannister. Sansa tries to be neutral after Nymeria’s attack on Joffery, but it’s no use. Cersei demands that Lady is killed since Nymeria is nowhere to be found. While Sansa is not murdered by the Lannister’s, she is held against their will by them.

Nymeria belongs to everyone’s favorite tom boy, Arya Stark. Both Nymeria and Arya are very brave, not afraid to fight to anyone which becomes evident in an altercation with Joffery. Joffery attacked Arya and her friend, Mycah, at the trident. Both Arya and Nymeria fought back which gained Joffery a nice bite to his arm and a huge hit to his pride, having been beaten by a ‘little girl.’ Nymeria and Arya are also connected in their exile. Arya forces Nymeria to run away after the incident at the Trident and Arya has to run away from King’s Landing to avoid capture. Both fled the Lannister clan’s retribution and are both separated from their families.

This name is appropriate for the wolf of a sweet, summer child. Bran and Summer are extremely loyal to each other. When Bran was attacked on his sick bed, Summer rescued him from his certain death. Summer could sense the imminent danger Bran was in and stopped the would-be murder when Catelyn could not. Summer saved both Bran and Catelyn’s lives that night. This incident also helped Catelyn learn to trust and value the direwolves.  Bran and Summer’s relationship grows in importance in subsequent novels. 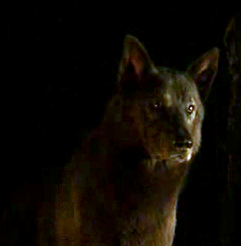 This dark haired direwolf matches his owner in his ill-mannered nature. Much like Rickon, Shaggydog is often unruly. They are also overlooked by most everyone. They grow up wild in the absence of parental supervision, seeming to do as the will with no one to check them aside from Maester Luwin. Rickon is assumed to have dealt poorly with the death of his father and shows a bit of anger in his few scenes in George R.R Martin’s novels.  Shaggy seems to mirror Rickon’s anger at being seemingly forgotten by his family and often lashes out at those left in Winterfell. 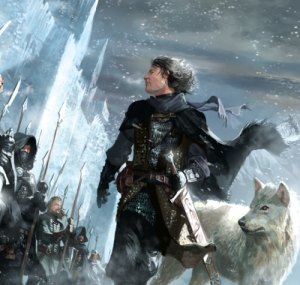 Ghost is the albino wolf who belongs to Jon Snow. As with the other direwolves, Ghost shares particular similarities to his owner. Both were born of the same family, but are not considered ‘one of the pack.’ Ghost was pushed away from the litter by his siblings, much as Jon is held separately from his high born siblings. And also like the other members of his pack, Ghost has a keen ability to sense danger afoot. He is instrumental in saving the Lord Commander of the Night’s Watch from being killed by a wight at Castle Black.

The importance of these direwolves cannot be ignored. The wolves are fiercely loyal to their owners and have interceded in times of peril for the Stark children. Will Sansa and Arya now be in even more danger because they are separated from their wolves? Which direwolf are you most excited to see again in season 2?