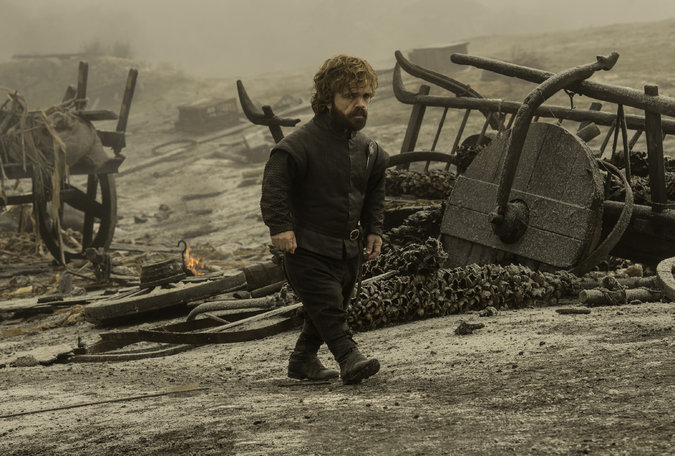 After last week’s episode of Game of Thrones left us a little singed from all the dragon fire, “Eastwatch,” was a bit of a slow-burn, focusing on conversations rather than carnage. The episode opened with Jaime Lannister, who we had last seen plunging down into the depths after an unfortunately short lived attempt at slaying Daenerys and ending her reign once and for all. He was about to be roasted, when Bronn tackled him into the water, but Jaime is still not happy about almost drowning– “You could have killed me,” he lectures as the sellsword heaves him, muddy armor and all, onto the shore. Bronn, not particularly flustered by the lack of thanks, reminds Jaime that he still wants his promised castle and gold– apparently badly enough to dive in front of an angry dragon. Speaking of angry dragons, Jaime realizes that three of them means real trouble. Bronn is not too concerned, because he declares that the moment the scaly beasts attack King’s Landing, he’s out, castle or not.

Unfortunately, not everyone has the opportunity to take off at the threat of dragons. Tyrion paces the devastation of the Drogon-razed battlefield while Daenerys threatens that she will burn any soldiers who do not bend the knee (Jon doesn’t know how good he has it!). She talks about how she wants to make the world a better place, but it’s the snarls of Drogon that prompt most everyone to bow before their new queen. Randyll Tarly won’t however. He tells Daenerys he already has a queen, the wildfire-loving Cersei Lannister, and when Tyrion suggests to his own queen that she be merciful and send Randyll to the Wall, Randyll’s not having it. So, Daenerys decides to do away with him, and Randyll’s son, Dickon, who shocked everyone with his good looks and good nature last week, insists that if his father is going to go up in a ball of flames, so will he. Father and son stand before Drogon, and Daenerys cries “Dracarys.” The remaining Lannister soldiers are quick to bend the knee after that.

Jaime returns to tell Cersei of the Dothraki and dragon danger, and she doesn’t seem particularly concerned, which frustrates him. She suggests buying some mercenaries, and Jaime tells her that hired help isn’t going to cut it. He also informs his sister that in her final moments, Olenna Tyrell admitted to killing their son, Joffrey. Cersei is not pleased– this is exactly why she wanted Olenna whipped through the streets, or flayed alive, rather than humanely poisoned, she reminds Jaime. Jaime stubbornly continues to try to find positive qualities in Cersei worth hanging around for. Her new haircut is pretty snazzy, right?

Daenerys flies back in triumph to Dragonstone and Jon ends up having a bonding moment with Drogon. He gives him a few  tentative pats on the nose, which the scaly beast seems to enjoy, although being an adolescent, he can’t help but do a few signature eye rolls. Daenerys informs Jon that no matter how terrifying her reptilian progeny are, they will always be her children. Jon has the look of someone who discovers their romantic interest takes their pets a little too seriously– it’s not like he was ever one to coddle Ghost. Not long after, Ser Jorah shows up. Thanks to Samwell Tarly, his greyscale is a thing of the past, and he’s ready to serve his Khaleesi again. Daenerys gives him a big hug, and welcomes him back into the fold, but Ser Jorah’s face falls when he sees the swoon-worthy Jon Snow. It’s back in the friend-zone for the Mormont.

At Winterfell, Bran wargs into some ravens and goes sightseeing beyond the Wall. He sees his old friend, the Night’s King who gives a stern look at Bran’s raven emissaries and Bran decides he’d better send some birds down to Dragonstone and the Citadel, warning of the impending doom.Down at the Citadel, the maesters still won’t take the White Walker threat seriously, even after receiving Bran’s message. They laugh at Sam and threaten to give him more busywork when he warns them that the end is nigh. Eventually, Sam gets fed up and decides that the maester-life is not for him. He takes off into the night, with a bunch of stolen books, Gilly, and Baby Sam. Shortly before he leaves, Gilly accidentally stumbles on a text revealing that Jon is a legitimate Targaryen, because his true father, Rhaegar annulled his previous marriage and married Lyanna Stark in a private ceremony, but Sam is too angsty to pay attention, and Gilly doesn’t know what she’s reading, so this pertinent information gets lost to all but the audience.

Tyrion and Varys– panicky over Daenerys’ sudden desire to “burn them all”–debate whether she will follow in the steps of her father, the Mad King. They seem hopeful that she just needs good advisers, but recognize that getting her to listen to their advice is going to be difficult. Down in the war room, Jon gets Bran’s letter which reignites his concerns about the White Walkers. He tells Daenerys for the hundredth time she needs to help him fight them, but Daenerys reasonably points out that if she turns north now, Cersei will triumph. It’s agreed that they need to prove to Cersei that the White Walkers are real, so that they can form a truce for the time it takes to defeat the icy threat.  Jon and Jorah decide they will head beyond the Wall, snag a wight and bring it back for some show-and-tell. Still, they need to negotiate an audience with Cersei. Who better to convince Cersei than Jaime? Who better to convince Jaime than Tyrion? Davos agrees to smuggle Tyrion down to King’s Landing for a chat with his estranged brother, so off they go.

We take a break to check out how the Stark children are doing at Winterfell. Sansa and Arya are squabbling because the Northern lords want to put Sansa in charge, in place of the absent Jon Snow. Sansa declines, but Arya questions her loyalty to Jon. Later, Arya follows Littlefinger all over the castle, watching him scheme and spy. She later breaks into his room and finds a letter hidden in his mattress– the letter Cersei coerced Sansa to write to Robb in Season One. What could Littlefinger be planning? Nothing good.

At King’s Landing, Tyrion and Jaime’s reunion is tense. Jaime is still hurt that Tyrion killed their father, Tywin. Davos has a more happy get-together with Gendry,  Robert Baratheon’s bastard son, who we last saw in Season Three. Gendry has been laying low, making weapons for the Lannisters, but armed with his father’s signature war hammer, and a spiffy new buzzcut, he’s ready to go on an adventure with Davos. The two of them return to their boat, only to be harassed by Lannister soldiers. Davos bribes them with money and aphrodisiacs (who knew fermented crab had such powers!), which pleases them, until Tyrion shows up. There’s only so many scarred dwarfs out there, and the soldiers get suspicious.  Not to worry! Gendry dispatches them with a hearty blow of the hammer.

After his covert meeting with Tyrion, Jaime tells Cersei about it, but she reveals she knew of the meeting all along. She also announces that she is pregnant with another one of Jaime’s children, and this time, she’s going to tell the world that he is the father. Jaime is flummoxed, but also happy– it’s always been a sore spot for him that he couldn’t call his children his own, but at the same time, Cersei’s constant desire to make their taboo relationship public can simply not end well, and he knows it. Cersei agrees to indulge Daenerys, saying that they will have to be clever to win against the Dragon Queen’s superior forces.

When Gendry, Davos, and Tyrion return to Dragonstone, Gendry ignores Davos’ advice to once again lay low and introduces himself to Jon Snow. They’re both bastard sons (supposedly!) of men who were war-buddies, and immediately seem to be the best of friends, themselves. Gendry decides to go with Jon on his zombie scavenger hunt. Jon takes off, soon after that, for Eastwatch by the sea. He and Daenerys make eyes at each other, as they depart, and Jorah, not to be outdone, passionately slobbers all over his Khaleesi’s hands. Even Tyrion gets in on the sentimentality and tells Jorah he will be missed despite their rocky past. The boat pulls away, and somewhere Theon Greyjoy breaths a sigh of relief that he will no longer have to schedule his day around avoiding the frigid glares of the King in the North.

Jon, Davos, Gendry, and Jorah arrive at Eastwatch in the blink of an eye. They meet up with Tormund, who agrees to join them on their quest, although he’s heartily disappointed that Brienne won’t be coming. He then brings them down to see the imprisoned Brotherhood Without Banners, who tried to get past the Wall, and are all very grouchy that they were impeded. After a bit of back and forth, they too, agree to join Jon’s Suicide Squad. They bundle up, gather their weapons, and head out into the elements. Something tells me collecting a wight is going to be a little more difficult than they think.

This episode covered a lot of ground, and set the stage for the final installments of Season Seven. What did you think of it? Comment below!