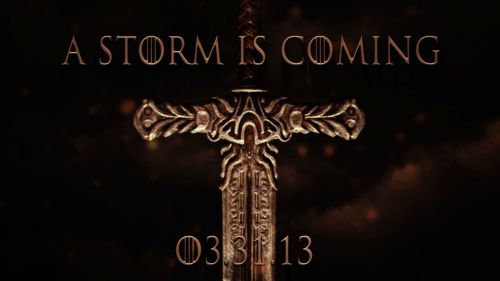 UPDATE III: Here it is the FULL TRAILER!:

UPDATE II: HBO released this TEASER for the TEASER:

Are you teased or what?

New York, N.Y., February 21, 2013 – The Season 3 trailer of HBO’s Game of Thrones makes its exclusive world premiere on Jimmy Kimmel Live! (ABC) on Friday, February 22nd.  A big fan of the series, Kimmel kicks off the countdown to the new season premiere on Sunday, March 31 at 9:00 p.m. ET/PT, exclusively on HBO, with the all-new 60-second trailer that will offer a first look at the action and treachery that continues in the visually stunning series that has become a pop culture phenomenon.

Stated Kimmel, “I am so excited about this trailer, even I might watch my show.”

The trailer will be posted to the Game of Thrones YouTube channel immediately following its east coast debut on Jimmy Kimmel Live!.  http://www.youtube.com/gameofthrones.

So it looks like we’ll get it even earlier!  We still expect it to air along with Girls on Sunday night as well so if you miss it no worries.  It’ll be here on this page, on HBO’s official social channels and probably On Demand.

Thanks to our friends over at WinterIsComing.net, we have learned that the very first S3 trailer for Game of Thrones will premiere this Sunday, Feb. 24 before the new episode of Girls. The proof can be found in HBO’s OnDemand Schedule. Since the listing is for Feb. 25 – and assuming HBO follows the same routine of posting videos a day after they air – we should see the first REAL trailer for S3 on Sunday night. So, what can we expect? Well, actual footage from the upcoming season for start. So far we’ve seen a few behind the scenes clips and cast interviews, but no real footage. Kind of strange that HBO has taken this long to air the first trailer for one of their biggest shows, but I guess late is better than never. 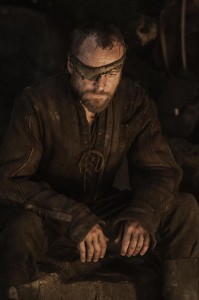 In addition to the trailer premiering this weekend, WiC managed to find a few other vids that are set to air in the coming weeks. First is a short, 3 minute long Season 1 & 2 recap show – most likely containing clips from both seasons – available through OnDemand starting on March 4. The next, and more interesting, is a 13-minute feature titled “Game of Thrones: Season 2 Recap Show”  which is available March 9. Given the length of this video, WiC hints that it won’t just contain mere clips from last season, but will also include interviews with cast and crew as well. I would have to agree with them 100% there. The 3 minute video will likely be full of clips, with the longer one being a more in-depth look at the season. Possibly even including some additional footage from Season 3.  You can also catch up by picking up a copy of Game of Thrones season 2 on DVD or Blu Ray.  Here’s our massive review of the set.

We’ll post the trailer on THIS PAGE once it’s live so bookmark away and hit refresh all day Sunday.