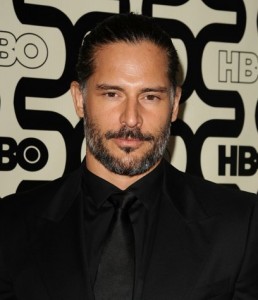 Alright ‘Trubies, this one is for you. During Sunday night’s Golden Globes, Access Hollywood managed to catch up with True Blood star Joe Manganiello and he dished some info on the upcoming installment of the series. He told Access that he will soon be cutting off his rocker-like hair in order to go back to work on True Blood this week. Wait, what?! This week? That must mean… yes, True Blood has begun filming for Season 6, which is also set to premiere this summer. According to Manganiello, he has read the first few scripts and explains them as being “pretty wild”.

“[It’s] racier,” he said. “My character’s taken over the wolf pack, so as an alpha, and a pack of dogs, you gotta regulate, you gotta set it straight with everybody so there’s some violence. It’ll be fun.”

“This is Season 6 and the first couple scripts I read – I think they’re doing a lot of stuff that they maybe held back on the past couple years,” he told Access. “They’re pretty wild. I think it’s going to be a pretty wild season.”

“Wednesday night I start shooting, so I really hope it warms up by then or it’s going to be a really tough night,” he laughed.

Author’s Note: So, what do you think fans? Will next season finally bring the madness of True Blood to a conclusion? Or will it be the same old storyline that has been driving away fans for the past few seasons? Let us know your thoughts in the comments below.