Last week HBO finally let slip the first real trailer for the new season of Game of Thrones.  So hungry were fans for that sweet, sweet nectar that is the world of Westeros that some even spent the time to dissect the thing frame by frame.  But what if I told you there were more coming?

UPDATE: The extended trailer has arrived! Not as much extra footage as we previously thought, but still epic nonetheless. Analysis of the new scenes will be coming soon.

Here at HBO Watch we spend a lot of time digging through HBO’s scheduling documents to try and nail down premiere dates and start times for your favorite shows.  But we almost fell out of our iron thrones when we saw this on the HBO On Demand schedule: 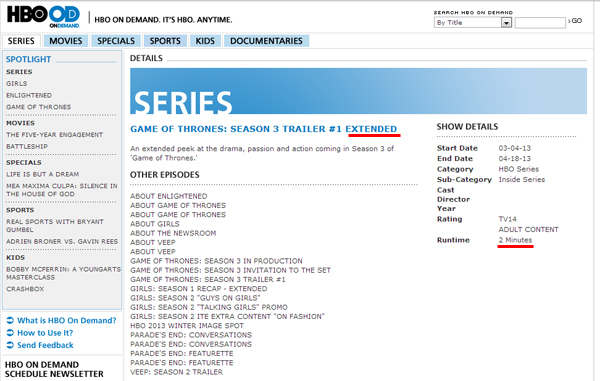 Yes, you’re reading that correctly.  The extended trailer will run a time of DOUBLE that of the first: 2 luscious minutes!  The On Demand schedule puts the trailer out on March 4th but we all know that means the trailer will play before the new episode of Girls on Sunday night (March 3rd @ ~8:55PM).  It may even premiere earlier online.

Either way a new trailer is coming.  We’ll post it here when it arrives.  Until then: get excited for more Drogon and the Gang!