Oh, I see what they did here. We see the other side of the coin when EUPHORIA’s second special airs on Sunday, January 24 2021. On Sunday, December 06 we saw the aftermath of Rue and Jules’ split from each other for the Holidays from Rue’s perspective. Next month we will see it all from Jules’ side of the story. Below is the press release setting us up for “F*ck Anyone Who’s Not A Sea Blob.” (Yeah, that is the episode’s real title.) 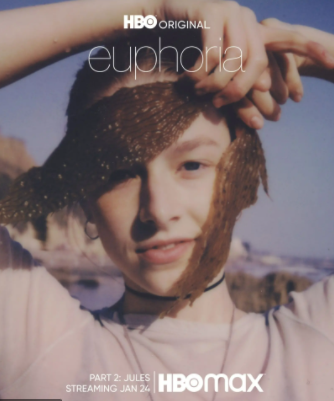 The second of two special episodes of the Emmy winning HBO drama series EUPHORIA will debut SUNDAY, JANUARY 24 at 9:00pm ET/PT. The episode will air on HBO and be available to stream on HBO Max.

The special episode directed by Sam Levinson, titled “F*ck Anyone Who’s Not A Sea Blob,” follows Jules (played by Hunter Schafer) over the Christmas holiday as she reflects on the year. Schafer serves as co-executive producer on the second special episode, which she co-wrote with EUPHORIA creator Sam Levinson. The first special episode debuted Sunday, December 6 on HBO and had an early streaming premiere on HBO Max starting Friday, December 4. Both special episodes were produced under COVID-19 guidelines.

EUPHORIA is created and written by Sam Levinson, who also serves as executive producer; executive producers Kevin Turen, Ravi Nandan, Zendaya, Drake, Future the Prince, Hadas Mozes Lichtenstein, Ron Leshem, Daphna Levin, Tmira Yardeni, Mirit Toovi, Yoram Mokady and Gary Lennon; Will Greenfield serves as a co-executive producer. Produced in partnership with A24 and based on the Israeli series of the same name, which was created by Ron Leshem and Daphna Levin, from HOT. Follow Euphoria on social and use #Euphoria to join the conversation.

Note that Hunter Schafer has added producing and writing credits to her resume here. We will see how the episode turns out as we hear Jules’ perspective. After all, she is the one who decided to get on the train and leave without Rue. Also, note that the first special episode did quite well. Rotten Tomatoes said, “Euphoria slows down the tempo without losing the beat in a special episode that pairs a raw Zendaya with a steady Colman Domingo to create small screen magic.” Now, come January 24 it is Jules’ turn as viewers are quite eager to continue the EUPHORIA story.