It has been a long wait for EUPHORIA. The final episode of Season One’s eight-episode run was back on August 04, 2019. On July 11, 2019, the series was renewed for a second season. Since then, the series has garnered a number of awards or nominations and recently capped a big honor for Zendaya for Best Lead Actress in A Drama Series. That must have made the creators of the series itching to get something rolling again as a duo of special episodes are planned to arrive ahead of Season Two, lest people forget the character of Rue and her friends.

Straight from an official HBO press release comes details of the plan:

The Emmy-winning HBO drama series EUPHORIA will return with two special episodes, with the first debuting SUNDAY, DECEMBER 06 at 9:00pm ET/PT. The episode will air on HBO and be available to stream on HBO Max.

In the aftermath of being left by Jules at the train station and relapsing, the first special episode follows Rue (played by Emmy-winner Zendaya) as she celebrates Christmas. Written and directed by series creator Sam Levinson, the episode, titled “Trouble Don’t Last Always,” also stars Colman Domingo, who appeared in season one. The title and date of the second episode are forthcoming. Both special episodes were produced under COVID-19 guidelines.

Let’s rewind a little bit to get us caught up with the story as it played out in “And Salt the Earth Behind You.” Rue (Zendaya) and Jules (Hunter Schafer) reconcile as Rue recovers in hospital after a kidney infection. Nate (Jacob Elordi) is unable to get an erection with Maddy (Alexia Demie), who confronts him about his sexuality, causing Nate to get physical with her. Nate wins his final high-school football game, but his father, Cal (Eric Dane), criticizes his performance. As they 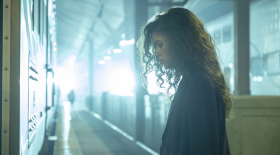 fight, Nate begins to hit himself, leaving Cal shaken. When Nate goes into the shower, Maddy steals the video of Cal and Jules that Nate has in his possession, goes home to watch it and is shocked by what she sees. Cassie (Sydney Sweeney) terminates her pregnancy with the support of her mother. Fez (Angus Cloud) breaks into the house of Mouse’s supplier and robs him in order to pay Mouse. At the winter formal, Kat seeks out Ethan and apologizes for her behavior. Rue confronts Nate, threatening to expose Cal. Nate taunts her about Jules’ loyalty. After spending the night trying to one-up each other, Nate and Maddy peacefully decide to end their relationship. Jules admits to Rue that she is in love with both her and Anna. Rue and Jules decide to leave town together, but Rue backs out at the last minute and Jules gets on the train alone. Returning home, upset, Rue snorts a line of cocaine and experiences a vivid and musical hallucination, leaving her fate unknown.

It has been over a year now and her fate is still unknown. But we are about to get some answers as the pending episodes bridge the gap between S1 and the anticipated S2. Are you eager to get caught up once again in EUPHORIA?