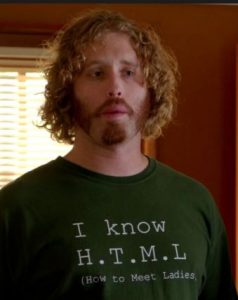 Erlich Bachman once said, “My head is so far up my own ass I can see the future.” Well obviously as we’ve seen from the season opener of Silicon Valley, the future holds neither Erlich Bachman nor T.J. Miller. Though sources and commentary on the departure have been mixed as to the reason behind the exit.

Erlich Bachman is, in many ways, the character we wish we could be and get away with being. His crass commentary and stoner-cool lifestyle is chill but also at times insanely intense.  His dramatic nature certainly got him in plenty of trouble. Turns out trouble is real for T.J. Miller outside the show as well. Miller has stated that they had offered a reduced schedule, but at his insistence to move on and do other things, Silicon Valley and Miller parted ways. He insists that the parting was mutual. And I believe it because his story was left open-ended, though apparently no one really seems to miss him.  With the recent allegations coming out against Miller, it is some pretty damn convenient timing for HBO to avoid negative press. Here is Miller’s spin on things:

Daily Beast broke the story as an anonymous woman came forward to address the violence Miller committed when both were students at George Washington University.  Many would cite the #MeToo movement as bringing accusations out of the woodwork, but others would say the accusations could not be trusted.  The survivor did file a complaint with the campus police a year after the assault, though with no evidence it ended up in student court.  The survivor states student court proceedings lasted a couple weeks where she was grilled about her habits, and resulted with the court simply saying it had been resolved.  Others have corroborated her story included hearing graphic sounds the night of one of the attacks and dealing with student court proceedings after.  More details about the whole story are available at the Daily Beast. Trigger warning, the story is often graphic and very violent.

However, this woman’s story is not just the only one.  Rumors have been going around the comedy community for years that women can’t trust Miller.  One female comedienne posted on Twitter about being threatened by Miller if she took out a restraining order against her ex, a friend of Miller’s.  Another anonymous Twitter user detailed an account of being at a bar with Miller, and the bartender taking her drink after seeing Miller messing with it.  Miller is certainly known for saying aggressive and often off-color comedy in his routines.  While he and his wife Kate have released a statement insisting the woman is out to ruin their relationship and maintain T.J.’s innocence, the evidence is certainly adding up to a pretty nasty picture.  In any case, HBO is better off without that drama.  But to quote Erlich Bachman back to you T.J., “You want a number? The percentage I give a fuck about you — zero — is trending steadily.”

So do you agree or disagree? Do you miss Erlich on Silicon Valley? Please weigh in.